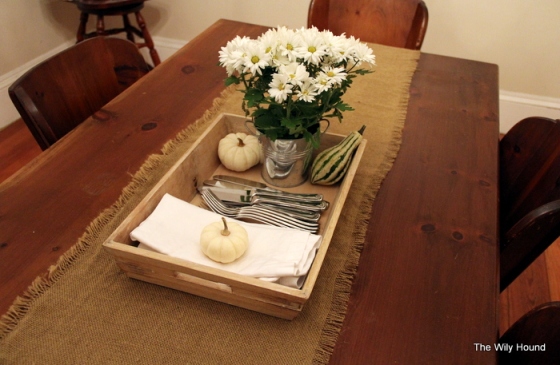 A few months back, my friend laurel introduced me to the wonders of Pinterest. If you’re on Pinterest, you probably understand what a huge revelation this was for me. If you’re not, sign on up and prepare to hermit yourself for a few days and scroll through page after page of craft ideas, treat ideas and more craft ideas. Sure, it’s a giant time-suck, but it’s worth it.

While perusing the site one day, I saw an adorable Autumn table arrangement that was set atop what looked to be a table runner made of burlap. It looked so cute that I searched around a little bit for a similar runner. I found a few online but they cost more than I was looking to spend (which is to say: pretty much nothing) and plus, it was just a long strip of burlap; I wasn’t looking for anything fancy since, let’s be honest, Brody will probably end up dragging it off the table to irritate us anyways. So I decided to make it myself.

I just had one thing standing in my way: I can’t sew. No matter how many times I try, it just never works out and I end up throwing bobbins and giving up. My sister and I have  tried to make Christmas stockings for the past 2 years and it almost tears the family apart. So I turned to my trusty pal Hem Tape. After some research, it seemed that other folks have used hem tape on burlap so I figured I was in the clear. I headed to a fabric store and picked up 3 yards of burlap for a whopping $9, which left me enough for 2 table runners and some extra fabric for another project that I have up my sleeve.

I measured our table and figured out how long I wanted the runner to be. The burlap was 54 inches wide so I decided that I would just cut it in half, lengthwise, and worry about the width later. 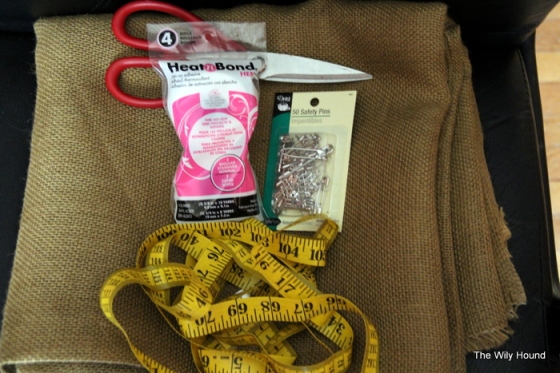 The woman at the fabric store gave me a great tip for cutting  burlap: instead of just eyeballing it and cutting what looks to be a straight line, decide where you want to cut and then pull out one of the strings; this will leave a line for you to follow and will ensure a straighter cut. 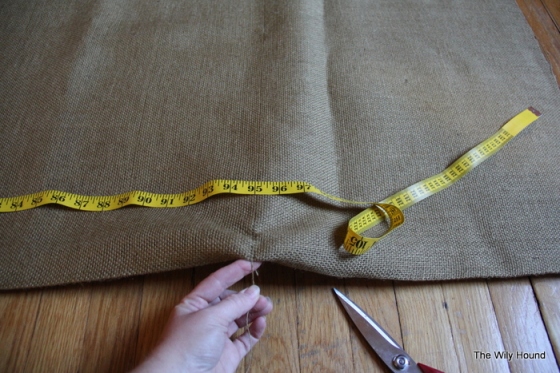 So far so good. From there I cut along the line to trim off the excess fabric and then followed the same steps to cut it lengthwise and I was left with 2 long strips of burlap.

The burlap had a pretty strong smell to it, so I looked up some care instructions and tossed it in the wash on the gentle cycle. It was looking a little rough when it came out, but it was just a few strings that had come loose and bunched up, so I pulled those off and then laid the fabric over some chairs on the porch to dry. Once they were dried and aired out, it was time to get started!

I set up shop at the sewing station (read: the kitchen table). It was dark at this point, so please excuse the lighting.

I misted some water on the fabric and ironed it on high. The wrinkles come out in no time! Then I trimmed the fringe off of the edges so that they wouldn’t get in the way while I was ironing the tape. 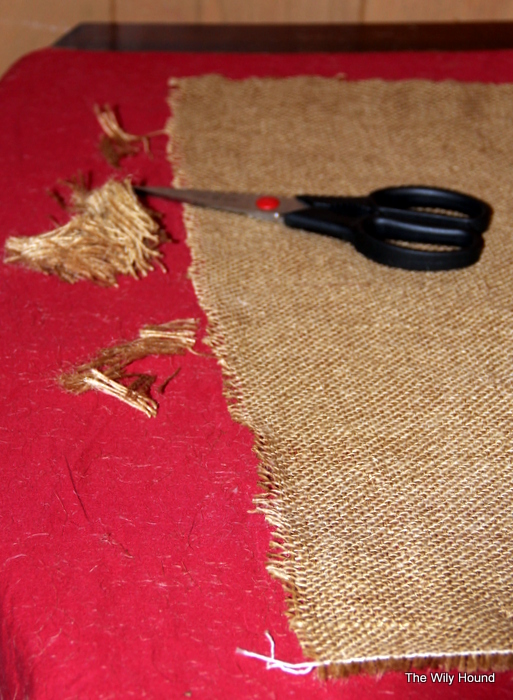 I used an existing table runner to figure out how wide I wanted this one to be and, using the same method as above, pulled out a string to give myself a cutting guide. I did the same thing for the hem but instead of cutting, I ironed a seam so that I wouldn’t be messing around with getting everything even while the tape was in there. 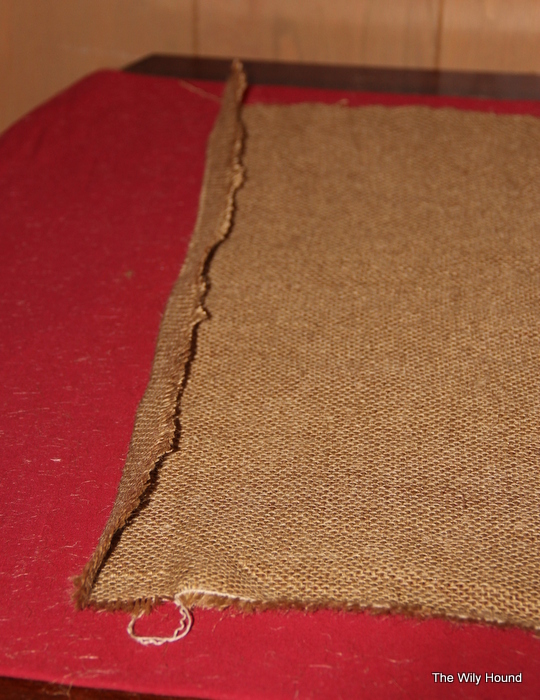 From there I just laid the hem tape under the fold and ironed along the edge according to the instructions on the package.

Repeat for all 4 sides, and voila! A burlap table runner with “finished” edges. 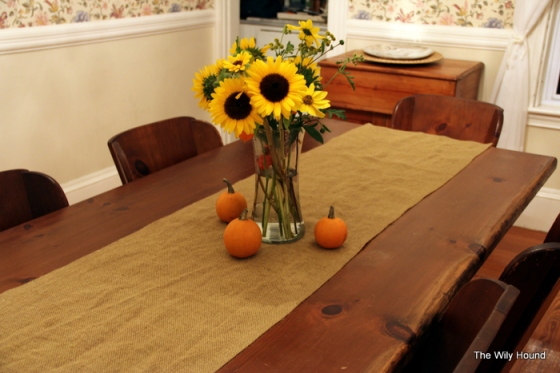 I decided to go a different route for the 2nd runner. Once the burlap was cleaned up a little bit after drying, the edges wound up looking pretty nice. They were fringed and even and rustic-looking, so I figured “Heck, why mess with hem tape? Leave ’em like that!”

It was also kind of late and, I’ll be honest, my enthusiasm might have been dwindling. Luckily it worked out.

So I trimmed off the excess fabric and then frayed the newly cut edge by pulling strings out one-by-one. The other edges looked great already so I just make sure the fringes were approximately the same length on all sides and cleaned them up a little wherever needed.

To be on the safe side, I tied a little knot at each corner using 2 strings that were going in opposite directions to keep the edges from fraying more. 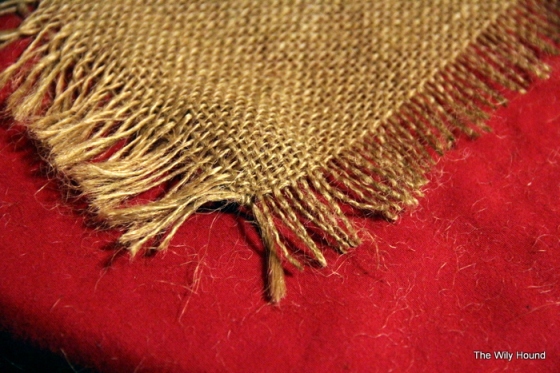 And there ya go! Table runner number 2.

While neither one of these methods is particularly difficult, the 2nd one could not have been easier. Washing and drying time aside, this is a 10 minutes project at most. Even if you want to get fancy and use a sewing machine (pff, show-off), I can’t imagine that it would take too long since all you’re really doing is sewing 4 straight lines.

And then you can look lovingly at your $4.50 table runner every time you walk past the dining room.

6 thoughts on “Burlap Table Runners for the Sewing Impaired”