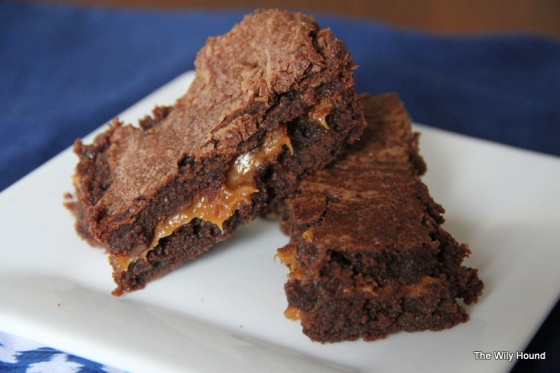 I came across some delightful looking pieces of happiness a few weeks ago on The Pioneer Woman’s blog and I decided then and there that I wouldn’t rest until I had made them. That resolve was abandoned a few hours later when I found myself very sleepy and without any caramel, so I shook my fist at the night sky and vowed “Soon enough you will be mine, delightful pieces if happiness!”

That brings us to two weeks ago. I made a batch of the caramel brownies to bring down the Cape for the 4th of July. I stuck pretty close to the Pioneer Woman’s recipe, except that I used a chocolate fudge cake mix instead of German chocolate, even though TPW distinctly says that you have to use German chocolate. Well I’m sorry, PW, but they didn’t have it at the store. The brownies were delightful indeed and I would have shared them here, except that I mentioned to Justin in passing that I thought that they could be more chocolaty and he agreed.

So in preparation for our trip to Vermont this past weekend I decided to try something a little different. I had dreams of a dense, fudgy consistency to the chocolate that would compliment the caramel so I wanted to try making them with legitimate brownies rather than the cake mix from TPW (delicious as they were).

I’m happy with how these ones came out and apparently others were too because they were awarded the prestigious JSoA. 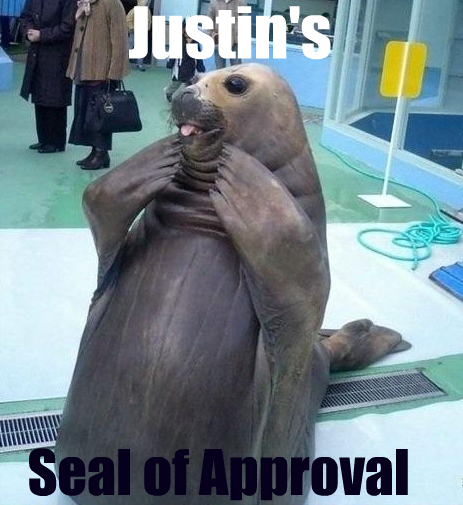 Since it’s not really the same recipe (and since this blog is family-friendly), I am steering away from the ‘Knock You Naked’ title that TPW had bestowed upon her brownies and am officially dubbing these ‘Pants-Off Dance-Off Brownies’.

No? Still not appropriate?

Before I get too far into the details, I should point out that this recipe is in no way, shape or form a health-conscious one, so if that’s what you’re looking for you should probably look elsewhere. I know that some of the cookie recipes that I have posted in the past are “lighter” versions but this just isn’t one of ’em. It’s a great treat to bring to a cookout or party but probably not the best one to make on a Saturday and polish off by Sunday eve. Just my opinion.

I based the brownie portion of these bad boys off of this recipe here and since there were going to be a few people at the bash in Vermont, I doubled the recipe so that I could make them in a 9×13 inch pan.

Start off by making the brownie batter as you usually would. 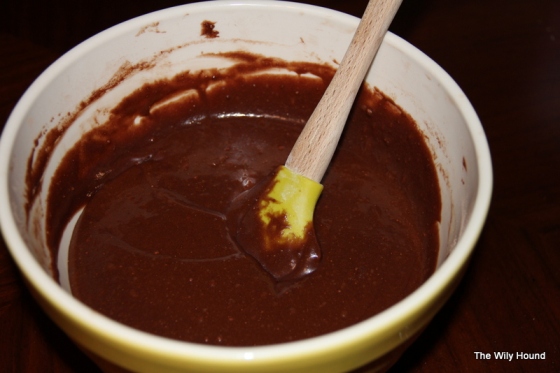 Pour about half of the batter into a pan. Or if you’re like me, into a casserole dish because your 9×9 pan is down the Cape and your 9×13 pan disappeared 8 months ago but you keep forgetting that and it comes as a shock every time you try to find it. 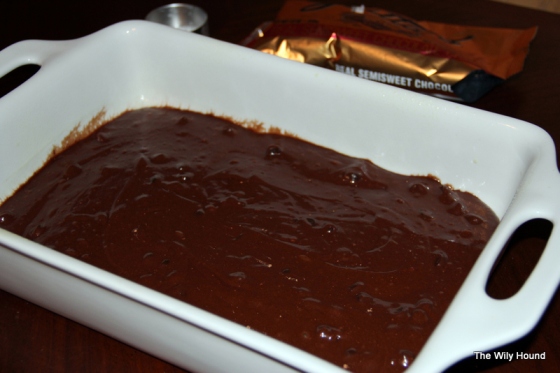 Helpful little tip: if you happen to misplace your 9×13 inch pan, you can use a casserole dish instead. Just cut the temperature of the oven by about 25 degrees since casserole dishes and baking dishes heat up differently.

Bake it for about 15 minutes.

While that is baking, start unwrapping your caramels and toss them in a double broiler. This is a thankless task, so reward yourself with the occasional caramel. 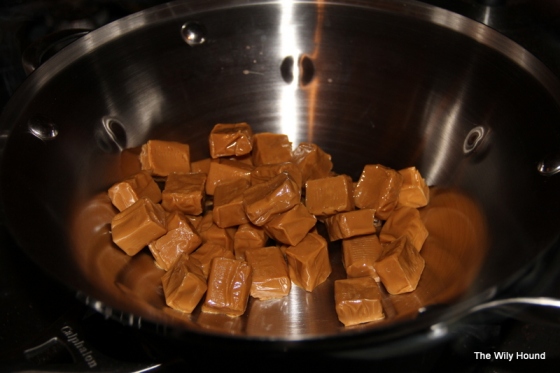 Take the time to admire all of your hard work. 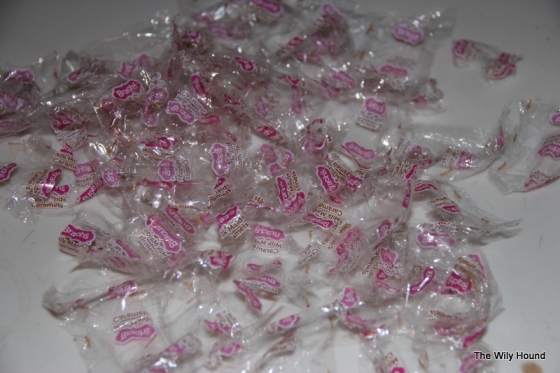 I was really hoping that the mound of wrappers would be more impressive. 60 caramel wrappers might not look like a lot, but it is. Just trust me.

Add in the evaporated milk and melt everything together, stirring regularly, until the mixture is smooth. 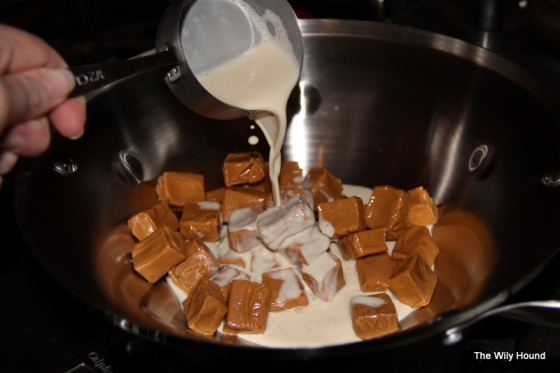 Don’t stick a spoon in there and eat the caramel, it is very hot. Again, just trust me. 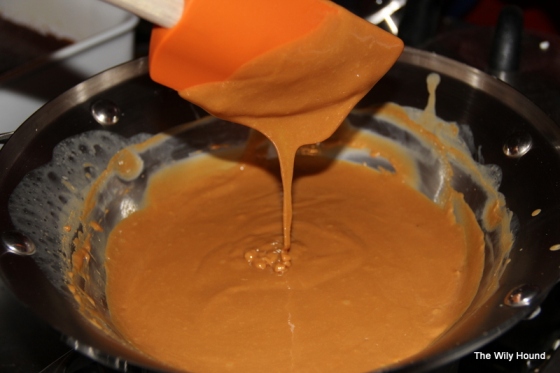 Once the caramel is melted, pour it over the brownies that you have just partially baked and smooth it out. 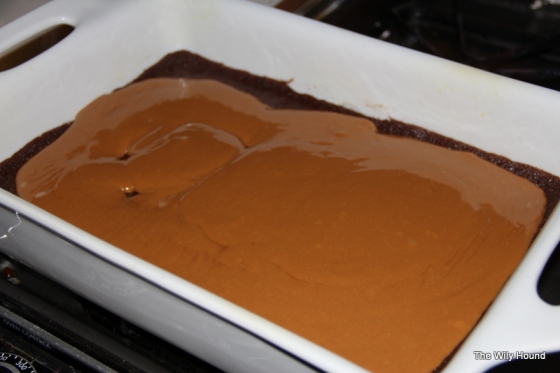 Make sure you get it in all of the corners! 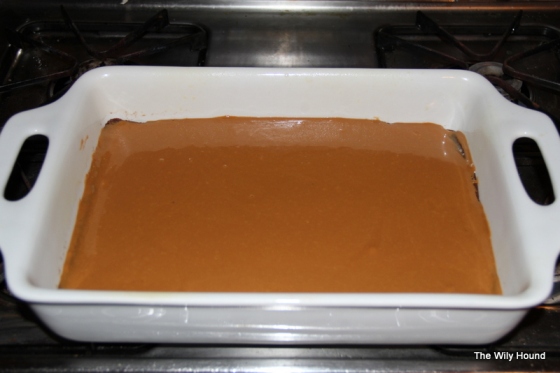 Toss some chocolate chips on there if you’re feeling wild. I’m sure walnuts would also be a hit but that’s not really my jam. 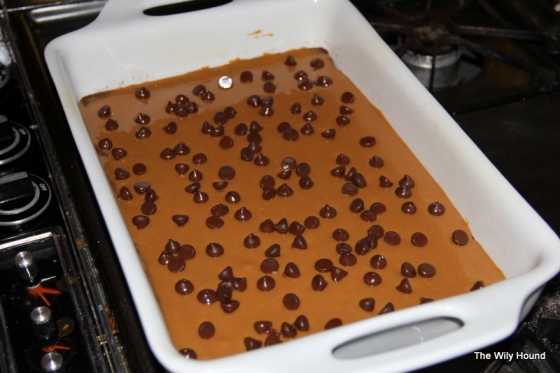 Please excuse the dirty stove, there was a bit of a caramel incident.

Pour the rest of the batter on top of the caramel and smooth it out with a spatula. Lick the spatula.

Just kidding, don’t do that, there are raw eggs in this recipe! 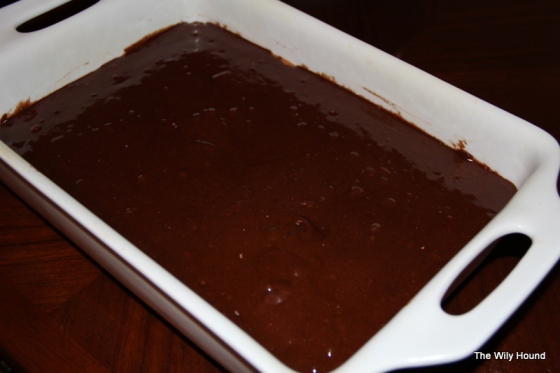 Bake them up for a little while longer. While they’re baking, start gathering your self-restraint because you’re not allowed to eat these right out of the oven even though you really want to. 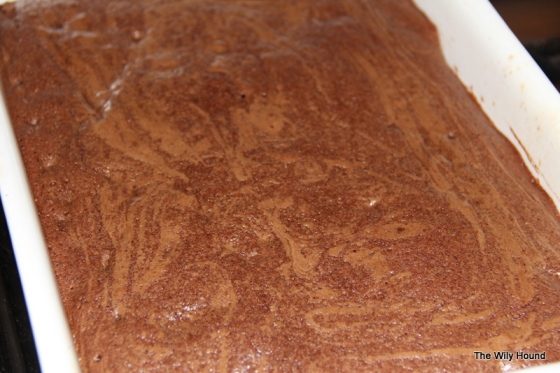 After they have cooled on the counter, pop them in the fridge for a few hours to make sure the caramel is under control before you cut into them. I know it doesn’t sound like a bad problem to have, but the caramel gets kind of out of control if you cut them while they’re still hot and then you just have to abandon all hopes of nice, uniformed brownies and go at the pan with a fork. Not the most appetizing dish to bring to a party. 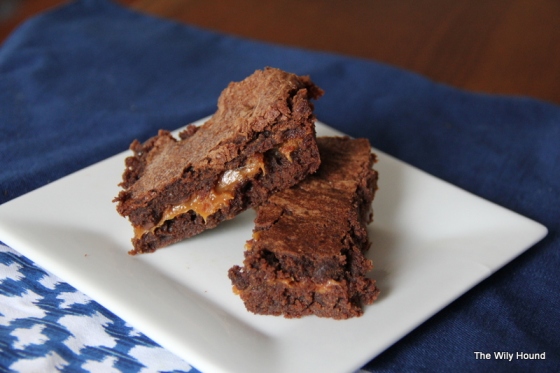 I still haven’t figured out if I like these better straight out of the fridge while they’re kind of hard and chewy or after they have sat out on the counter and gotten soft and gooey. Tough call. Either way, they’re delicious.

Preheat your oven to 325 degrees and grease the bottom of a 9×9 or 9×13 inch pan (if using a 9×13 inch pan, double the brownie recipe). In a large bowl, beat together the butter, sugar, eggs, and vanilla. Add in the cocoa powder, flour, salt, and baking powder and mix until combined. Fold in half of the chocolate chips. Pour half of the batter into the greased pan and bake for 15 minutes. Heat the caramels and evaporated milk in a double broiler or a heat-safe pan over a pot of boiling water, stirring frequently until melted and smooth. Pour the caramel mixture over the partially baked brownies and smooth out with a spatula, making sure the caramel reaches the corners of the pan. Top with the remaining chocolate chips and pour the remaining brownie batter over top, smoothing out gently with a spatula. Bake for an additional 30 minutes. Allow the brownies to cool completely and then refrigerate for a few hours. The brownies will be a little hard when chilled so remove half an hour prior to eating for a softer brownie.