We’re jumping (well, it’s really more of a halfhearted shuffling) for joy because the 5-day heat wave that we’ve been experiencing around these parts is slated to break today. It’s been downright balmy around here lately and our poor window AC units could use a break (for reference, our kitchen topped out at 91 degrees on Saturday).

We went to a cookout down the Cape on the 4th and got to spend the day catching up (and sweating, if we’re being honest) with friends. It was an awesome day and we had a blast eating cookout food and playing baggo (or cornhole or bags, whichever floats your boat – personally, I prefer baggo). We hit some pretty serious traffic on the ride back and didn’t get home until way past my bedtime, which made getting up for work a little rough the next day, but an afternoon nap pretty much on top of the air conditioner revived us enough to grill out on Friday night.

We spent Saturday on my brother PJ’s boat; Justin and I held down the fort on deck with PJ’s dog Riley while PJ and his friend dived for lobsters.

Even though the temperature on the water was probably 10 degrees cooler than it was on land, the sun was STRONG and it got hot pretty quickly. Justin and I swam around, lounged on a raft that was tethered to the boat and eventually grilled up some burgers. 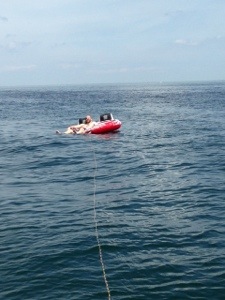 I wish that we could say that we escaped without sunburns but we weren’t so lucky, which is surprising given how bronzed Justin and I are naturally (in case it isn’t clear, that wasn’t a truthful statement – we practically glow in the dark). I think that the takeaway message of the day is that spray sunscreen doesn’t work, even if it’s SPF 70. Sunburns aside, it was a great day on the water. 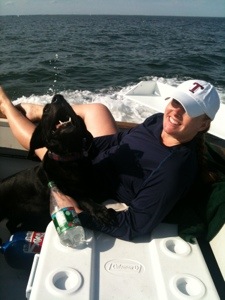 PJ and his diving buddy ended up catching 5 or 6 lobsters, so we whipped up some lobster macaroni and cheese for dinner. 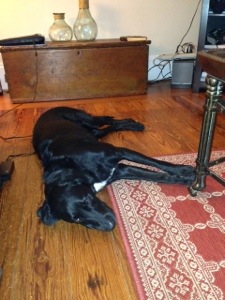 …so I took him to a nearby pond on Sunday to hike around in the shade and then go for a swim.

In typical Brode fashion, he transformed into a houndseal and swam around until I pretty much had to drag him back to the car.

And then he saw a horse, so that was just the cherry on top of an awesome outing.

A cookout at my parent’s house on Sunday night capped off the weekend and now we’re enjoying the fact that we’re only up to 82 degrees by 8am instead of the 94 to which we have grown accustomed.

Stay cool and have a great Monday!