You may have heard that the Olympics started last week. Luckily we didn’t have any plans this weekend because they really would have cut into my 24-hour a day Olympic watching schedule.

We watched the Opening Ceremonies at my friend Jess’s house on Friday and, to be honest, we weren’t 100% sure what was going on 100% of the time. We were so confused at times that we wondered if we were missing something, and as it turns out, we were. According to articles like this one, NBC did a pretty poor job covering the ceremonies. Apparently folks watching coverage on NBC missed out on some important parts of the ceremonies, including a few explanations of what, exactly, was going on.

Even so, I think that there were a few parts that wouldn’t have made a ton of sense, explanation or not. Like the giant baby, for example:

Matt Lauer is catching some flak for voicing his opinion on the baby with this comment: “I don’t know if that giant baby is cute or creepy.” But let’s be honest, he was just saying what we were all thinking.

There were definitely parts of the ceremony that were beautiful and meaningful and they obviously put a ton of time and effort into planning and organizing everything. I can’t even imagine how long it took them to convince the Queen to skydive. I’m glad she decided to do it, though. YOLO, Your Majesty. YOLO.

The rest of the weekend was pretty much a haze of Olympic events. I stayed up way too late watching awesome events like women’s gymnastics (amazing) and men’s swimming (stressful!). I’m having a hard time remembering what I watched and what I competed in, but I’m pretty sure I watched beach volleyball and competed in (and won!) men’s water polo. What I do know is that I took a break from crushing events on Saturday to go over to my friend Laurel’s house to swim (recreationally, just to clarify) and eat some lobsters and corn on the cob (competitively) and hang out with friends (also competitively).

I also managed to make it out of the house on Sunday as well to do some errands with my parents. We headed to REI so that I could pick up a raincoat, which I anticipate needing when Justin and I bop over to Ireland for a few days in September! After talking about it for years, we finally pulled the trigger and booked the flights last week. We are going over for 9 days and staying in Cork and we are open to any suggestions for must-sees like a particularly awesome castle or fun pubs or friendly sheep. Huzzah! Now I just have to track down that pesky passport.

The rest of Sunday was spent cheering on Gabby Douglas and prepping some breakfasts and lunches for this week. The good news is that Gabby did very well and won a spot in the all-around event. The bad news is that I got wrapped up in the floor routines and burned the granola.

I did manage to stay focused enough to make what I affectionately refer to as “Quinoa Mess”: 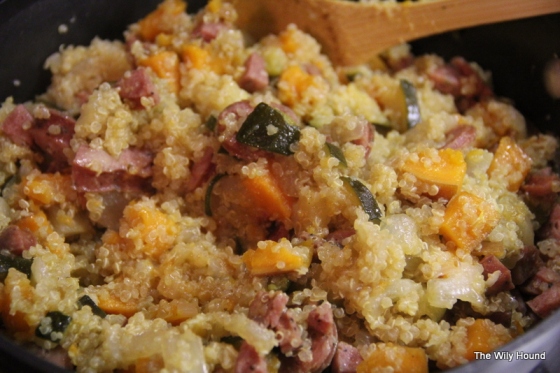 It’s not much to look at, but its delicious and nutritious and it reheats really well, so its perfect to make in a big batch at the beginning of the week and to bring to work for lunch. I was going to share the recipe in this post but I just looked at the muted TV and saw that I’m missing some serious uneven bar routines.

And also, apparently this is an Olympic event:

So that’s an option if my career as a men’s water polo champ doesn’t pan out. Good to know.

I would like to know what your favorite and least favorite events are to watch. Bonus points: if you had your pick of Olympic events (and assuming you had endless talent), which event would you want to compete in?