Believe it or not, Brody wasn’t always the charming, well-behaved hound that he is today. For a time in late 2010 through late 2012, he was a bit of a wild child and spent much of his time biting faces (in a playful way, but still), jumping on anyone he saw and generally engaging in other such tomfoolery. 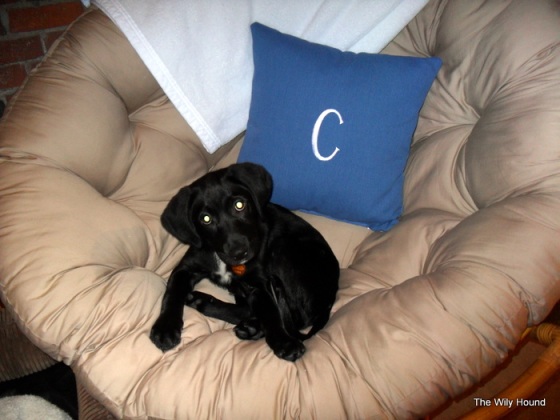 I finally decided that enough was enough and signed us up for a group obedience class. I should have smelled trouble when we walked in and I saw that the class took place in a large gym that had been sectioned off with white plastic fences. There were 4 classes that ran simultaneously: a puppy play class, a beginner class (in which we were enrolled), an advanced class, and a show dog class. Brody immediately felt the pressure of having to make the jump from beginner to advanced, and he expressed his concerns by sticking his head through the white plastic fence and trying to bite (playfully, but still) a dog in the puppy play group.

I started to get nervous that B would be the worst-behaved dog in the group, but then I saw the yellow lab that could (and would) jump 5 feet straight into the air and go in for a face bite during his descent. Sure, B bit faces too, but it was usually when you were leaning down to his level and kind of asking for it. There was also a strong-willed great dane who would at any moment decide that he wanted to check out another class and drag his owner across the ring. We would have to wait while the woman put her shoulder into the dog’s side and made a wide turn to get him back to his spot.

Our instructor was a bit of a drill sergeant (if drill sergeants are in their 70s and partial to animal-themed garb) and would stand in the middle of the ring and yell orders at us and scold us if we stepped out of line. While she screamed, the human students were supposed to stand, facing her, with their dogs seated at their sides. Sometimes she would yell for a few minutes and inevitably the dogs would get distracted and start to act up. Sometimes Brody would bust out some of his best tricks to try to get a rise out of me, which he usually did; next to the drill sergeant in the dog print sweater vest, the spry yellow lab and the woman being dragged behind her great dane as if she were water skiing, B sprawled out on his back playing ‘dead dog’ was too much.

We spent a lot of time working on walking on a leash, sit-and-stay, and heel. Provided there wasn’t anything super interesting going on elsewhere, Brody was pretty good at sit-and-stay. We worked on it each week and, after a few weeks, we were told that we would be sitting and staying for 5 minutes. It seemed a little ambitious because even as a person, sitting still and quietly doing nothing for 5 full minutes can be tough.

Regardless, B sat down, I told him to stay and then I walked into the middle of the ring where the rest of the owners were standing facing their dogs. The first couple of minutes went really well but then I could tell that I was losing B a little. He started looking around a lot and then yawned a laid down. Not ideal, I thought, but his face wasn’t through the fence so I went with it. We were still flying under the radar because the drill sergeant was yelling at the guy with the miniature pinscher that kept biting everyone. Our cover was blown, though, when Brody planted his back feet and started pushing himself towards me. He was still lying down, so he was sort of sliding along on his chin, and the momentum caused his front legs to swing back to his sides. His resemblance to a seal was remarkable but obedience class is not the place for impressions.

I mean, I laughed pretty hard, but only for a minute.

Justin came to what turned out to be our last class the next week. He sat on the sidelines and observed, which might not have been the best idea because Brody had a hard time concentrating with him there; the good news is, while all of the dogs were supposed to be sitting along the edge of the ring, Brody was sitting calmly and quietly. The bad news is, they were supposed to be facing the drill sergeant and Brody could not stop staring at Justin, who was sitting directly behind us. No matter what we were doing, Brody stared at Justin. It was a little annoying but we persevered.

We were then given instructions to run around the ring with our dogs at our sides and I noticed that Brody was dragging behind a little bit. We weren’t supposed to look down at them while we were running so I just dragged him along and kept trucking. Then the woman behind us alerted me to the fact that Brody was…how do I put this delicately…pooping. While running. No easy feat, I imagine, but not the gentlemanly behavior that we encourage.

Horrified, I yelled an apology to the group, clued Justin in on what was going down and then took Brody outside. We stood in the parking lot, discussed what had just happened, and decided that obedience school just wasn’t our jam. We rejoined the class, which had been put on hold while the drill sergeant yelled at Justin for using all of the paper towels, and said a silent goodbye to our classmates.

So yeah, maybe Brody is an obedience school dropout, but what a way to go.