My Grandmother’s story has been told a lot over the course of the past week, and for good reason: she was a remarkable woman. She and her husband raised 5 children in a close-knit project in Boston. She loved her family fiercely and did everything that she could to ensure that they were healthy and happy. She played the role of peacekeeper well – probably because she had a lot of practice. Granted, I wasn’t there to witness firsthand the ringer that my dad and his siblings put their parents through when they were younger, but I can only imagine that it was nothing short of ‘trying’ given the way they act today. I’ve heard that a family dinner wasn’t a family dinner until someone ran out of the room in tears, whether it be one of my aunts or one of their boyfriends. Luckily everyone seems to have developed some pretty thick skin because the jokes still fly around family parties today, but they are met with raucous laughter instead of weeping. In fact, those 5 kids turned out to be some of the most caring people I know and they have remained close all of these years later.

Nana was always the shining example of a loving, caring mother and grandmother. When my dad was a teenager and rail-thin, she would make him a special weight-gain shake to drink at breakfast. As it turns out, the shake was a little too much for him in addition to the eggs, cereal and oatmeal that she had prepared, so he would pass along the shake to one of his sisters and Nana was none the wiser. She also prepared homemade eggnog for him in the mornings, which consisted of a couple of raw eggs, beaten with some sugar, milk and vanilla. I can verify that it is as delicious as it sounds because Nana made it for me one time when I stayed overnight at her house when I was younger. I was thrilled by the treat and told my mother all about it when she came to pick me up the next day. Now I’m not condoning the consumption of raw eggs, but the holidays are quickly approaching and eggnog is a delightful treat. I’m just saying.

She was 46 when her husband passed away unexpectedly and she found herself taking on the role of ‘single mother’ to her 5 kids. She had been a stay-at-home-mom and never had the need for a license, but that was no longer going to work, given her new circumstances. She got her driver’s license and enrolled in classes and after some hard work, she got a job as a clerk for the city licensing department, where she worked for 15 years. By the time she retired, she had a few grandkids (and eventually great grandkids) and she spent a lot of her time going to Christenings, First Communions, prom picture sessions and graduations. Her parents had come over from Ireland and Nana loved St. Patrick’s Day, so she would have the family over and make her famous Irish Bread and everyone would sing Irish songs and dance around the kitchen. I was an Irish Step Dancer for a time in my youth and I could always count on Nana to be there when I was dancing, clapping along to the music.

Family came first for Nana and she was always there when you needed her, even if she probably didn’t really want to be. One year on Halloween, Nana offered to come to our house and hand out candy so that both of my parents could bring my siblings and me trick-or-treating. Sure, it might not sound like much, but for Nana it meant putting aside her fear and dislike for dogs since, at the time, we had an Basset Hound named Sturdley. When we got back to the house, Nana was sitting outside on the front steps in the cold. Apparently Nana got a bad feeling when Sturdley gave her the evil eye and she felt more comfortable risking frostbite than risking a vicious hound. For the record, this was the vicious hound: 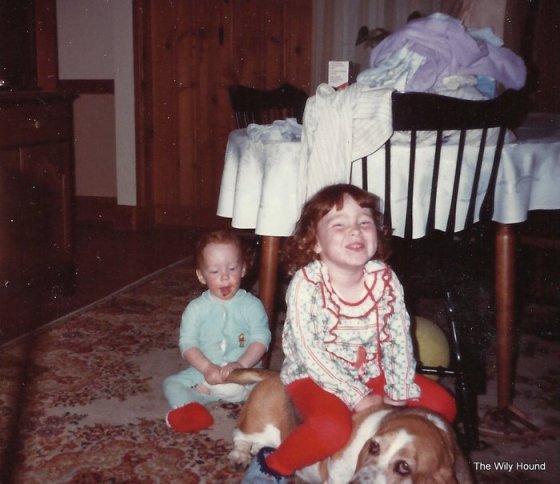 My brother and sister with Sturdley, circa 1982. Note my brother’s death grip on Sturd’s tail. My mother would want me to request that you disregard the laundry on the dining room table.

We spent a good amount of time this past week going through old pictures of Nana and the family. She was always so impeccably dressed and perfectly accessorized. She looked lovely wherever she went and that is due in part to the big, beautiful smile that seemed to be a permanent fixture for her. She had an incredible sense of humor and an infectious, easy laugh that made everyone feel at ease. She was selfless and loving and the perfect example of the kind of a person that one should strive to become. We are all better people for having known and loved her. 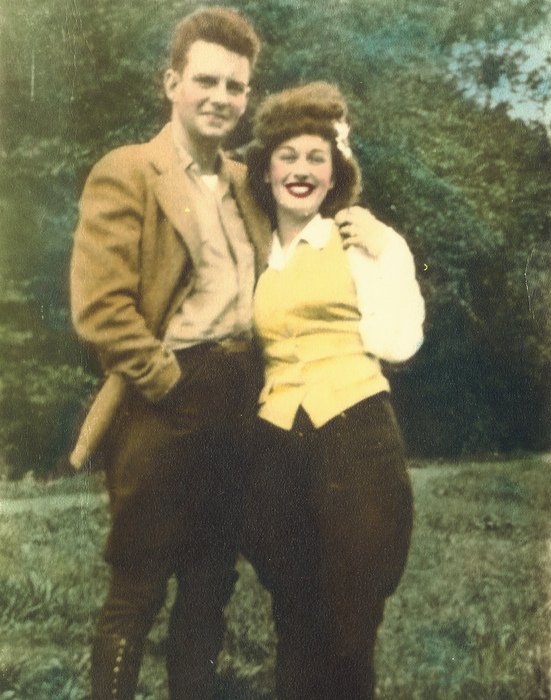 7 thoughts on “A Lovely Woman”