I have mentioned my childhood cat Tony here on The Wily Hound before. She was a clever little black and white lady with a flair for dramatics. She was an indoor cat but would sometimes sit at the window and stare longingly at the world beyond her walls. She felt that she belonged out there – we could see it in her eyes.

Eventually, her desire to experience a wilderness about which she knew nothing drove her to action and she made a few attempts at freedom. Usually she would get a few steps out the door and get so overwhelmed at the options that she would just stand there, shell shocked. Other times she would decide to use her brief stint with freedom helping herself to some nice grass. And sometimes she would get sprayed in the face by a skunk (you can read more about that here).

We realized that this kind of devil-may-care attitude was going to get her in trouble, so we decided to meet her halfway by buying her a cat harness. It was a jazzy royal blue number with 2 loops: one for her little neck and another for her stomach. 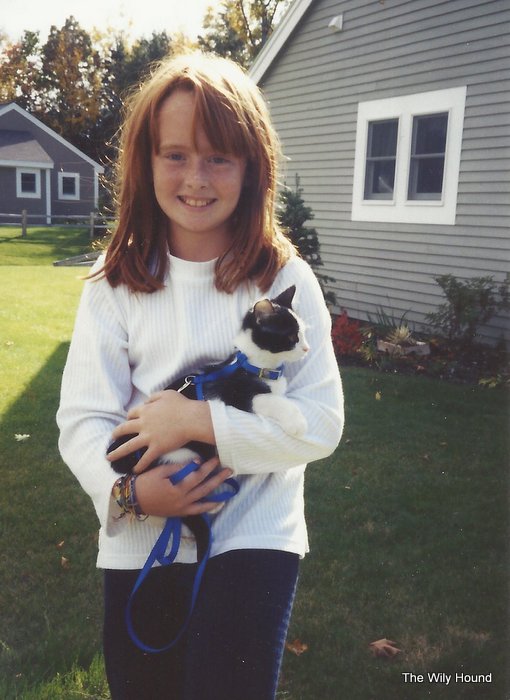 What’s that you say? That’s one rockin’ cowlick? Oh, why thank you!

We would put her harness on her and walk her around the backyard. She usually seesawed between unadulterated joy and absolute terror, bounding around one moment and slinking along through the grass the next, but we think that the joy usually won out.

Things got a little hairy when Tony started packing on the pounds and eventually grew out of the stomach part of her size small harness. Luckily, she was carrying most of her weight in her midsection, so the neck part still fit. It wasn’t ideal, though – if she got too ambitious and ran after a falling leaf, there wasn’t a whole lot of give once she hit the end of the leash.

Tony during her heavier years

She didn’t let it get her down, though. She upped her cardio and was back in the harness in no time.

After a few laps around the neighborhood, my dad decided that Tony deserved more than the 4 foot radius to which she was limited and rigged up a retractable leash by attaching a clip to some fishing line. The clip attached to Tony’s harness and she could run for miles and if she got too far away, we could reel her back in. Everybody wins! It was a genius idea, no matter what our neighbors say.

I suspect that my dad got the idea when he was practicing casting in the backyard with a weight at the end of the line one time. After a particularly successful cast, he was surprised to feel some resistance when he started reeling the line back in. He was even more surprised when he saw that he had caught the neighbors ornery cat – the weight had bounced and somehow wrapped around the cat’s leg, and she was putting up a fight. Did I mention that she was ornery? My mom was thrilled to hear that my dad had hooked Goergette and that they now had to dodge teeth and claws to release her back into the wild.

Tony loved the freedom that the reel allowed her, and we loved how cool we looked when we used it.

Moral of the story: if you ever want to impress your neighbors, get yourself a cat, slap a harness on her, and reel her across the backyard with a fishing rod.