As I’m sure is the case everywhere, our local coffee shop has been overflowing with holiday treats like cranberry scones, peppermint flavored coffee and gingerbread muffins. And since it’s a well-known fact that a person can only look at gingerbread muffins so many times before they are forced to get their paws on some, I had to act.

I made a gingerbread cake last week using a recipe that I found online, but the flavor was a little bland. It was good, but it didn’t have the gingerbread kick that I was looking for.

In the interest of full disclosure, I should tell you that there is a chance that I may have forgotten to include the ginger, which might have contributed to the lack of ginger flavor, so I won’t hold it against the recipe.

I attribute it to fate that I got an email the other day from my beloved, America’s Test Kitchen, which included a recipe for “Classic Gingerbread Cake.” They won me over with the very first ingredient – a dark stout. Enter our unexpected special guest ingredient: 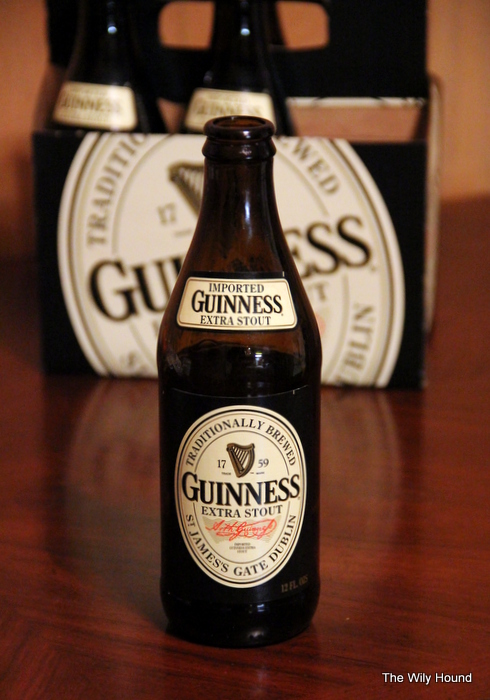 Though the cake might have benefitted from a few less minutes in the oven, it came out really good. The combination of the hefty heaps of ginger and the ground black pepper gives the cake a surprising (but not overwhelming) kick and the beer works with the molasses to yield a rich caramel flavor.

The original recipe called for an extra tablspoon and a half of ginger on top of what I used, but I think that it would have been a little strong for my taste, so I cut back.

I kept it simple and sprinkled the cake with powdered sugar. I bet it would also be great with a whipped cream topping or layered with a cream cheese frosting. I’ve got tentative plans to try out a gingerbread trifle for Christmas and you can bet your bottom dollar I’ll share it here if that plan comes to fruition.

Adjust your oven rack to middle position and preheat your oven to 350 degrees. Grease and flour an 8-inch square baking pan. Bring the stout to a boil in a medium saucepan over medium heat, stirring occasionally. Remove from heat and stir in the baking soda (mixture will foam vigorously). When the foaming subsides, stir in the molasses, brown sugar, and granulated sugar until dissolved and set the mixture aside. Whisk flour, ground ginger, baking powder, salt, cinnamon, and pepper together in large bowl and set aside. Transfer stout mixture to large bowl and whisk in the eggs and oil until combined. Whisk the flour mixture into the wet mixture in thirds, stirring vigorously until completely smooth after each addition. Transfer the batter to the prepared pan and gently tap the pan against the counter 3 or 4 times to dislodge any large air bubbles. Bake until the top of the cake is just firm to touch and toothpick inserted into center comes out clean, 30 to 40 minutes. Cool cake in pan on wire rack, about 11/2 hours. Cut into squares and serve warm or at room temperature.