My family and I have a long and arduous history of getting robbed. Everyone in my immediate family has been robbed at least once, which seems like a lot to me.  I wouldn’t consider us particularly reckless or careless with our possessions, so I’m not sure why we make such easy targets.

But alas, it is our fate.

Two of my favorite robbery stories come from my sister, Heather who, for the purpose of this post, has requested that I refer to it as getting “jacked” to make her sound hipper. The first time she got jacked was when she was younger and still living at my parent’s house (which is in an incredibly safe neighborhood, I should add). She walked out to her car in the morning and found that it had been broken into. At first glance, it appeared that the burglar had taken all of her spare change and her CD collection. Upon further inspection, she found that the burglar had only started to take her CD collection but after pausing to flip through it, realized that they didn’t share the same taste in music, so he (or she, I shouldn’t stereotype) had dumped all of Heather’s CD’s into the trunk of her car and made off with the CD case instead.

My other favorite Heather-getting-jacked story took place a few years ago when her apartment was broken into and her IPod was taken (among other things). She had her suspicions that it might have been her upstairs neighbors who had broken in and those suspicions were confirmed when she heard a very specific playlist of hers coming through her ceiling the next day. At least someone likes her taste in music.

Personally, I have been robbed twice. The first time was when I was living in the city with my two friends, Laurel and Kathryn. Kathryn and I arrived home from work and were relaxing in the living room when Laurel came home and, after a trip to her bedroom, inquired into the whereabouts of her laptop. We assured her that we hadn’t seen it, and that’s when the mess hit the fan and we started to notice all of the items that were missing. All-in-all, the hooligans had made off with a few cameras, some IPods, jewelry (which they had to root through clothes drawers to find – ew) and Laurel’s laptop. The best part of the whole situation is that they had bypassed my laptop and Kathryn’s laptop – apparently they weren’t the quality that they robbers had in mind.

My second rodeo took place a little more than two years ago. My mother-in-law Cathie was in town and I had met up with her, Justin, Justin’s brother Josh, and Josh’s girlfriend Emily after work for dinner. I parked in a parking garage near the restaurant and headed over to grab some grub. After dinner, Justin and his mom were going to drive Josh and Emily home and then they would meet me at our place. We parted ways and they walked to one car and I went up to the next floor of the garage to get to my car. I got off of the elevator and, much to my surprise, saw a gaggle of goons straight-up robbing it.

I had never really thought about what I would do in a situation like that, so I stood there for a minute mulling things over. I certainly wasn’t going to run up to them yelling, for surely I would get stabbed or tasered or something. But I also didn’t want to just walk away and let them rob me at their leisure. I tried pushing the alarm button on the car key but, for whatever reason, it wasn’t working that day. Frozen with fear, I suspect. Eventually I decided that enough was enough and, while crouched behind a nearby car, called out, “Whoops, I think that’s my car.” As if I wasn’t sure that it was indeed my car. And, you know, in case they thought that it was their own car that they were pilfering and that this was all just a misunderstanding. Sure, probably not the best thing to say, but I welcome any suggestions in case this ever happens to me again.

I scared the boots off of them, though, and if I had a sicker sense of humor, I would laugh at the way that they scurried away from my car with their dumb hands trying to cover their dumb faces. Dummies. I hopped in the car and called Justin, hoping that he was already at the exit and that he could tell security to keep an eye of for them, and then I headed down to the first floor. The security guard on duty must have had countless hours of training for this kind of situation, along with some sensitivity courses, because his words of comfort and advice were, “Maybe you should get a snake and keep it in your car. I would never rob a car that had a snake in it.” An excellent point, sir. To PetSmart I go!

In the end, those dummies got away with a GPS, a fake pair of Ray Bans, and some cash. They had my Kindle in hand but must have noticed that I was reading Bossypants because they ditched it when they were running away. Maybe they had already read it, I don’t know.

Hopefully I’ve paid my dues with whoever is in charge of robbery karma, but it’s good to know that anyone who tries anything now will have this to answer to: 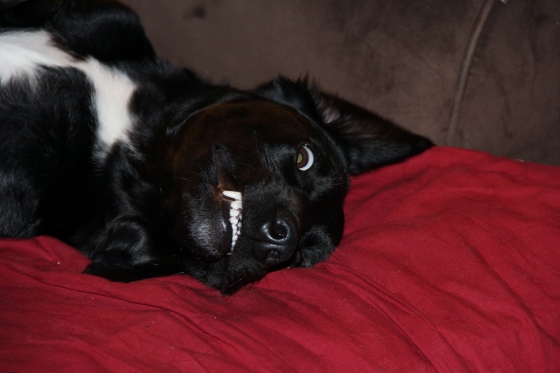 Or the snake in my car.