In case the title wasn’t clear, this is going to be a pregnancy-related post. So if you hang around here for the recipes or for some eye candy in the form of a wily hound, you should probably check back later.

Confession: this blog isn’t solely a vehicle used to grace the world with snapshots of Brody’s glorious mug. It’s also a journal of sorts that is a great way of remembering experiences that Justin and I have had (that might otherwise get lost in a computer’s picture library) and sharing the experiences with family and friends.

With that in mind, I thought that I would write a post detailing my first trimester of pregnancy, lest I forget all of the important details like exactly how much cereal I ate per day and how many times per week Justin asked me if I was finally craving fried chicken. A lot of bloggers out there do weekly updates that include pictures of their bumps and answers to a series of questions that cover all of the different aspects of their pregnancy, but since things haven’t been changing that much week-to-week, I figured I would play it by ear (what a weird expression, huh?) and share an update post from time to time. I’m currently just shy of 19 weeks, so this will be a little trip down memory lane. Here goes! 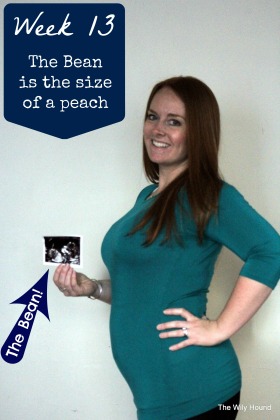 Symptoms
-A sense of smell so strong that it is bordering on superhuman. I’ve always had a pretty powerful sense of smell, but this is getting ridiculous. I think I could probably make a living sniffing out illegally imported goods at the airport.
-Some trouble sleeping through the night and occasional heartburn that usually creeps up around 2 or 3am. Propping myself up in bed usually helps, bonus points if Justin wakes up and gets completely creeped out by me sitting up in the dark looking at him.
-Some fatigue, probably related to the bullet point above.
-Breathlessness. I was thrilled when my doctor mentioned that I might notice myself getting out of breath easily (which has to do with hormones and an increase in my blood supply) because getting out of breath from eating cereal was making me really nervous.
I’ve really been very lucky so far in my pregnancy. No morning sickness and as long as I kept up a pretty steady stream of snacking throughout the day, no nausea. The first few weeks could best be described as feeling just a little bit hungover all day long – a slight headache, a little woozy, and a foggy brain but all in all, really not bad. I fully expect that all of the symptoms that I avoided will come roaring at me at some point (probably while I’m on the train on my way to work or something), because I feel like I got off pretty easy.

Cravings
-Cereal with very, very cold milk.
-Hard boiled eggs. This lasted for about a week, which is probably 6 1/2 days more than Justin would have liked. A bucket of hard boiled eggs doesn’t smell great when you open the fridge.
-Citrus. More oranges than you ever could have thought possible.
-Nature Valley Oats n’ Dark Chocolate granola bars. I kept one of these in my purse at all times in case I got hungry, and they’re delicious.
-Soft serve ice cream. Specifically, orange and vanilla swirl or coffee and raspberry swirl.
This category is a bit of a sore subject for Justin. He was really looking forward to reaping the rewards of my cravings after having heard that a friend of mine craved fried chicken throughout her pregnancy, but that phase just hasn’t hit me yet. I’m sure it’s coming though, so sit tight, Justin.

Aversions
-Red onions. I’ve never really liked them but now I just want to hurl them back from whence they came.
-Garlic. Sometimes I love it, sometimes I can’t stand it. Trouble arises when I think I love it, so I eat it, but then I realize that I don’t love it. You’re a fickle beast, garlic.
-Vegetables in general. Veggies and I had a rough week and I was literally choking them down so that the Bean would get some nutrients, but luckily that was short-lived and we’re back on good terms now.

Miss anything from your former, non-pregnant self?
-Licking the beaters when I’m baking. It’s probably for the best since I shouldn’t have been doing that anyways, but giving that up was way harder than giving up booze.
-Marylou’s Girl Scout Cookie iced coffee. Massachusetts folks, you know what I’m talking about.

1st trimester takeaways
I had a very, very easy 1st trimester, and for that I am grateful. It was weird (and fun!) knowing that we had this huge news that we weren’t ready to share with people yet, and then it was even more fun hearing and seeing reactions. I’ve heard that people lose their filter when they’re talking to a pregnant woman, so I’ve started keeping track of some of the ridiculous comments that I’ve gotten from folks (and there are some doozies!). The 1st trimester was super exciting but equally (maybe more than equal, actually) nerve wracking, so I was admittedly kind of pumped to get into the 2nd trimester where the waters are much calmer.

And for those who are wondering, Brody doesn’t seem to notice that anything has changed. I’ve heard that animals sometimes have a sense that there’s something going on and they start to act weird or clingy, but Brody has always been weird and clingy, so it’s kind of a wash.