Things are not getting neater at the Wily Hound house. 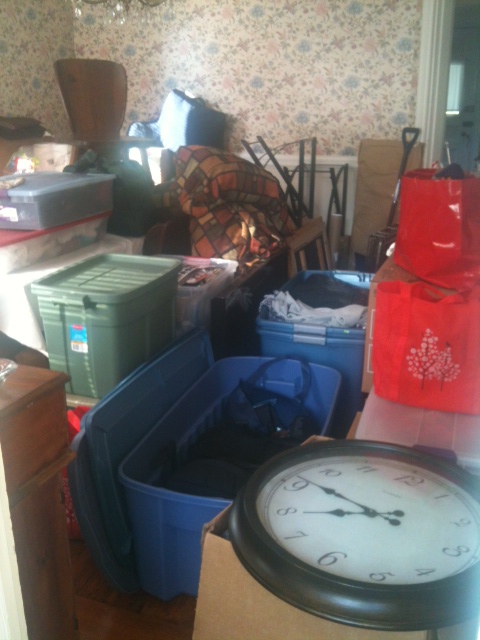 The good news: Nearly everything in the house is currently hanging out downstairs, which will make for easier carry-out on moving day. Exceptions include our bed, Brody’s bed, and 1 lamp, which are resting on the floor of our bedroom, giving the place that certain je ne sais quois that can best be described as “crack den chic.”

The bad news: Nearly everything in the house is currently hanging out downstairs. 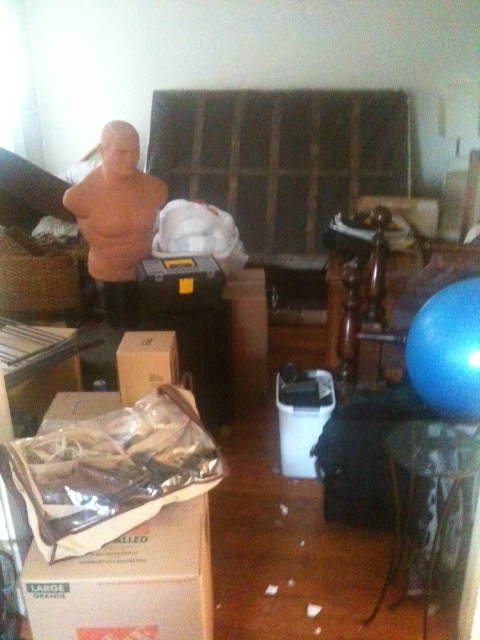 Don’t worry, that isn’t an angry shirtless stranger lurking in the midst of the mess (not that we would notice anways) – it’s Justin’s punching bag thing. It only takes about 45 or 50 instances of walking into a dark room and catching it out of the corner of your eye before you stop throwing up out of fear.

And the white stuff on the ground is just 1/1,000th of the stuffing that was blanketing the floors of the house last night. Brody found a bag of stuffed toys that we had squirreled away because whenever he gets his paws on one, he immediately rips it apart and goes screaming around the house with it, leaving a trail of stuffing in his wake. And then he squeaks the squeaker incessantly until one or all of us has to be committed to a mental institution.

But letting him play with those toys was better than having him follow us around with his head bowed and the whites of his eyes showing since, no matter how many times we tell him that we’re moving to a new house with a bigger yard that he can run around in, he just doesn’t get it and probably thinks that we’re leaving him to go on the longest vacation ever.

In summary, things are really super organized and if you ask me where a spatula is, I could totally tell you.