Justin and I are thrilled to announce the arrival of William Owen, the newest member of the Wily Hound family!

He was born on October 26th at 6:02 pm, 1 week before his estimated delivery date. He weighed in at 9 pounds, 3 ounces and was 19.2 inches long, and was healthy and hollering right off the bat. 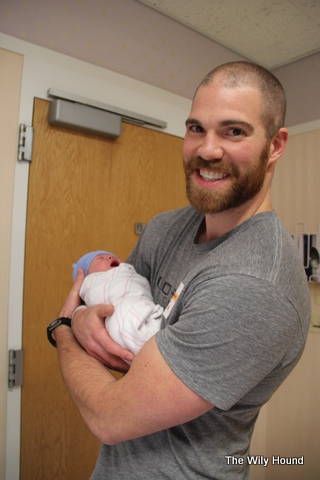 He’s been a gentleman from the start, waiting until I was done with my last day of work and on the train home to let me know that he was thinking of making an early appearance. Luckily we avoided making the evening news with a train birth, so my #1 goal of not having a baby at work and my #2 goal of not having a baby on public transportation were achieved. Thanks, buddy. Almost 40 short hours of labor later, we were holding him in our arms and wrapping our minds around the fact that he was all ours.

We’re all doing great and adjusting to life with a wee one. I don’t think I’m being biased when I say that he’s just about the cutest baby to ever exist, which makes the middle-of-the-night wake ups easier to swallow. Brody and Will were pretty much best friends from the start (even if Will doesn’t know it yet) – their introduction went really well and Brody has been interested in Will while keeping a respectful distance, which is exactly what we hoped for.

We’ve been counting our blessings and soaking up the exciting/funny/scary/fascinating newborn stage as much as possible, since we keep on hearing that it flies by. And on that note, I think there’s a baby in the other room that needs to be kissed on the head 184 times.