When we first adopted Brody, we brought him over to my parents house to show him off. He did us proud by peeing on the carpet a few times, eating a phone book and running around the house with part of a potted plant. It took a few months before Brody ever sat down, let alone laid down, while at my parents house. When the day finally came when we looked over and B was sleeping quietly in the living room, my mother and I immediately went over to him and started petting him and telling him how cute he was. My dad was flabbergasted and said “What are you doing?! He JUST went to sleep, leave him alone! Let sleeping dogs lie!” My mom and I sheepishly stepped away from the hound, but at that point he was already up and tearing around the house again.

I didn’t learn my lesson. To this day, whenever I see BMoney lying down or resting his big ol’ bug eyes, I have to go over and pet him and tell him how adorable he is. My theory is that the folks who came up with the saying “Let sleeping dogs lie” didn’t have a very cute hound.

Case in point: Sunday night. B was exhausted after an intense play date with his friend Riley. He passed out on the couch hard and didn’t move for like 2 hours, so obviously I had to see if he was okay by taking pictures of him since we all know how he feels about being photographed.

I was standing over him on the couch and he didn’t even stir.

How about a closeup? 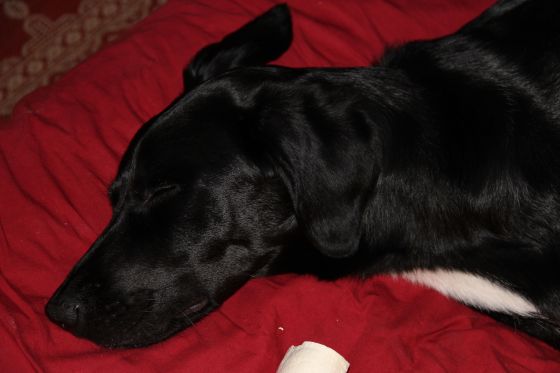 All right then. Hard ball, eh? What about…THIS?!?

Your favorite bone, right on your head! There’s no way you can sleep through that!!

I see that I’ve underestimated you.

You win this round, hound. But I’ll be back. I’LL BE BACK.

Until we meet again…