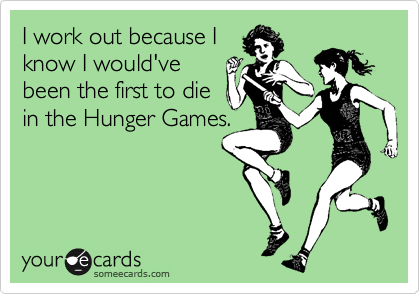 A friend included this in an email recently and I would be lying if I said that I don’t think of it every time I go for a run. If you haven’t read the Hunger Games series, do yourself a favor and find them right now and get to readin’. And don’t get all “Well, they’re books for kids* and I have a really sophisticated reading palate** so they probably wouldn’t appeal to me blah blah blah I’m too smart.”

You’re reading a blog that features posts from the point of view of a dog, your standards can’t be that high.

And plus, the books are great.

*The books aren’t just for kids, they’re for folks of ALL ages. Now that I think of it, kids probably shouldn’t even read them because they kind of revolve around kids battling one another in an outdoor arena and that might make kids who read the books wary of recess.
**I understand that “reading palate” probably isn’t a real term but I’m going to stick with it.

Now that I’ve sold you all on the Hunger Games, let’s talk running.

Monday
On the schedule: rest
What I did: went to see The Lorax

Tuesday
On the schedule: 3 mile run
What I did: 3.5 mile run
Today’s run was pretty good. My pace wasn’t stellar but I felt okay; this leads me to believe that I should have tried to kick it up a notch and work on my speed. I went a different route than I usually go and it worked out pretty well – I had been running the same 3.5 mile route for awhile during the winter because it is well-lit and I’ll take any help I can get to not trip over a root and bite it on the sidewalk. Now that it is nice and light when I head out after work, the world (well, town) is my oyster! Its fun exploring new neighborhoods (read: running through wealthy parts of town and creeping on the big, beautiful houses).

Wednesday
On the schedule: 4 mile run
What I did: who even knows
Well that was kind of a mess. Today was beautiful and I was pretty pumped to get out and run. That excitement was short lived, though; my legs felt like they were full of lead, I had zero energy and I just could not get into this run. I ran in the opposite direction that I usually do and thought I would go exploring like I did on Tuesday. Terrible idea. The first 2 miles or so were just sluggish and awful and there were HILLS – terrible hills! – and…lions and…never mind, I’m just making excuses. It was just a bad run. I walked for a good portion of mile 3, realized I was further away from home than I thought I was and then ran the 2.5 miles back. It was ugly. I wondered what the reason might be but I’m thinking that it might have just been an off day. I wasn’t dehydrated, I wasn’t over-tired, I wasn’t sick – maybe I ate lunch too early and just ran out of fuel? Who knows.

I had a dentist appointment on Thursday so I planning on taking it as a rest day, getting a short run in on Friday and a long run in on Sunday. My legs were still feeling off on Friday afternoon though so I decided to take 2 days in a row and rest up for a long run on Saturday.

Saturday
On the schedule: 8 mile run
What I did: 8 mile run
Hooray! This was a great run. I was a little nervous going into it because of Wednesday’s debacle but I put on my sneakers gave myself a little pep talk that went a little something like this: “Shut up dummy, you’re doing this so you might as well stop whining, you’ll need that breath 7 miles from now.” It’s no Miracle speech, but sometimes a kick in the rear does more good than a pat on the back. (As an aside, is that already a saying? If it’s not I think I need to trademark it. Please don’t steal it.) Plus, it’s scientifically impossible to have a bad run when this is the first song to come on Pandora:

I felt good pretty much the whole time. I took a note from a previous long run and brought some water with me. I thought that I would mind carrying it the whole time but it wasn’t much of a bother and it was reassuring to know that it was there if I needed it (I ended up drinking about 3/4 of it – every mile or so I would slow down and practice drinking on the run. Sorry to anyone who drove by and had to witness that). I slowed down a little around mile 7 but was able to keep a steady pace until the end; I thought of trying to do 8.5 but my right knee was yelling a little so I just headed home to stretch. I was tired the next day but my knee wasn’t sore, which is a relief. All in all, I’m happy with how it went!

2 thoughts on “Half Marathon Training: Week 4”