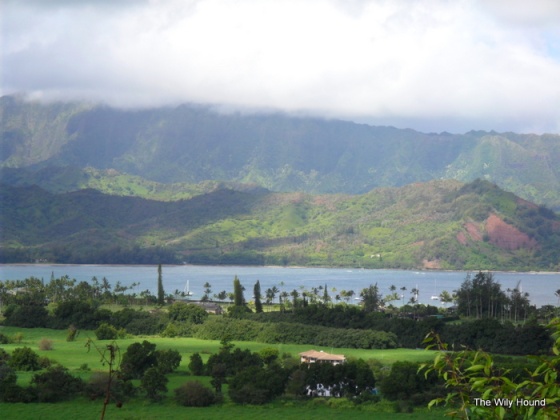 While we were planning our wedding, we kept getting stumped by the honeymoon. Since it was hurricane season, our destination options were a little more limited than they might have been during the rest of the year. We had narrowed it down to Europe (really narrow, huh?) and Hawaii. While both destinations obviously offer huge perks, we eventually decided on Hawaii because it seemed like it would be more relaxing than bopping around ancient cities and sightseeing. We anticipated being a little weary after the wedding planning process, so Hawaii sounded like the right choice.

Next up was picking an island. We kept on hearing that it “wasn’t worth it” to go to Hawaii and only see one island; if you were going to make the long trip over there, you should see as much as you can. While that definitely makes sense, we knew that we would be in Hawaii for 10 days and we thought that packing up midway through to head to another island sounded rushed to us (and plus, Justin hates flying, so the less flights, the better!). We did a little research and were immediately drawn to Kauai; the fact that it isn’t one of the popular islands like Oahu or Maui was appealing to us. We were kind of looking to “get away from it all” and Kauai sounded like the perfect place.

We were interested in renting a house or condo for our stay rather than staying in a hotel after hearing good things from Justin’s father about the HomeAway.com, which is a website that features vacation rentals all over the world. We searched around and found a house that looked great on the north side of the island. 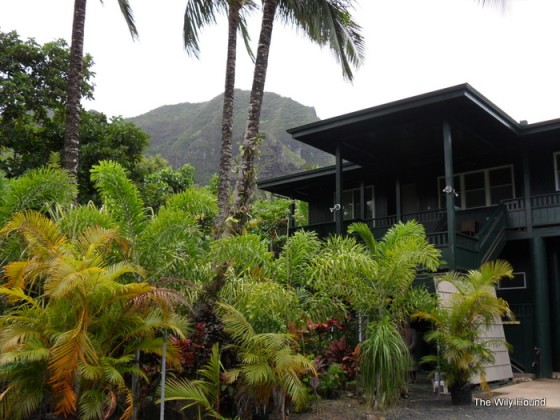 Though it’s always a risk to rent a house based on some pictures that you see online, this time it really worked out great. The house was beautiful and it was right across the street from Tunnels Beach (which we have since seen sneak onto lists of the best beaches in the world). 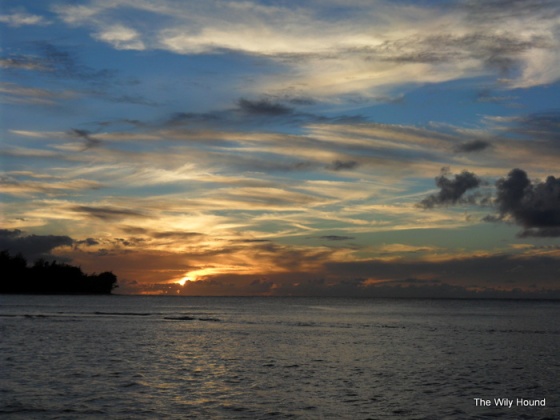 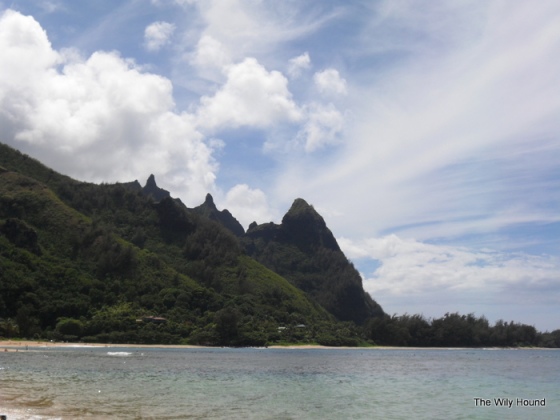 There was plenty of room, laundry, a kitchen and no people to fight for lounge chairs. Plus, after pricing it out, it ended up being cheaper to rent a house than it would have been to stay in a hotel, so that was definitely a bonus.

We had rented a car, which is kind of necessary on Kauai, and we had such a great time cruising around the island and taking in all of the sights. Everything is so shockingly beautiful there and the people are so nice. 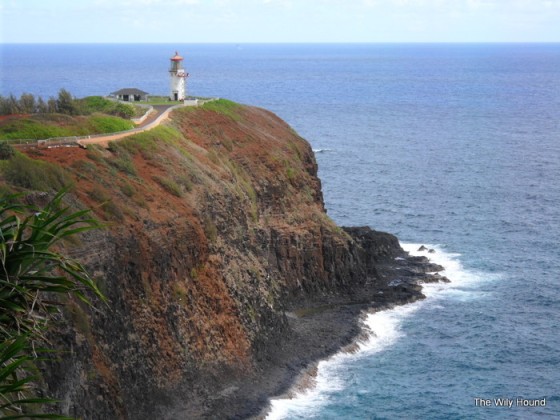 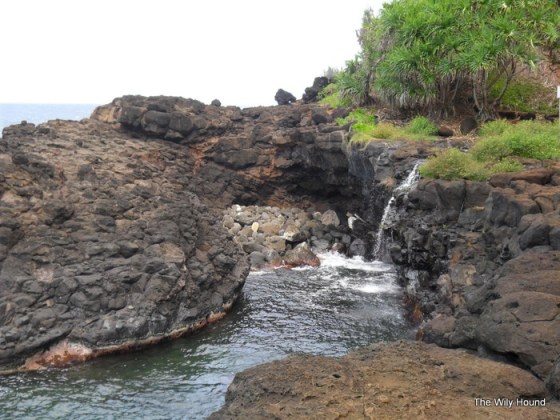 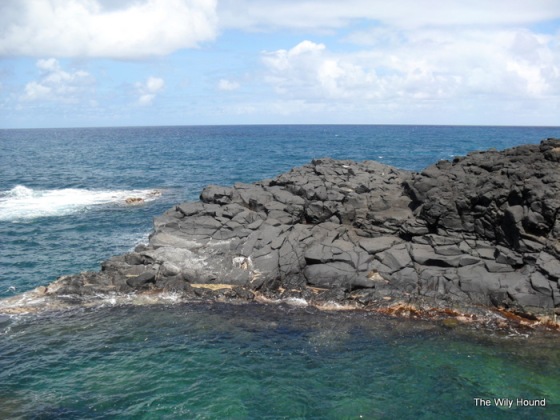 Another one of Queen’s Bath

We ended up splitting our time pretty evenly between lounging around on the beach and getting our butts off of the sand to explore and we were really happy with how that went. On one of our first days, we went for a hike along part of the Kalalau Trail to the Hanakapi’ai Valley waterfall. 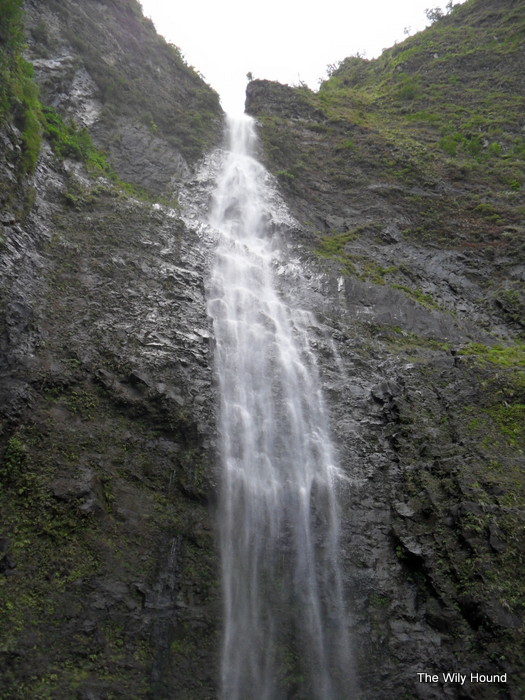 Justin’s dad and his wife had hiked part of the trail and they said that it was beautiful but tough. They were 100% correct on both accounts. 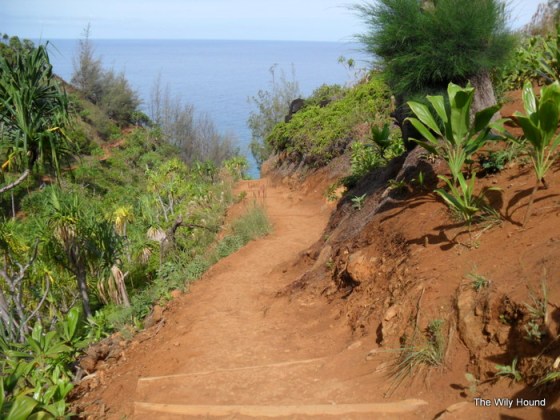 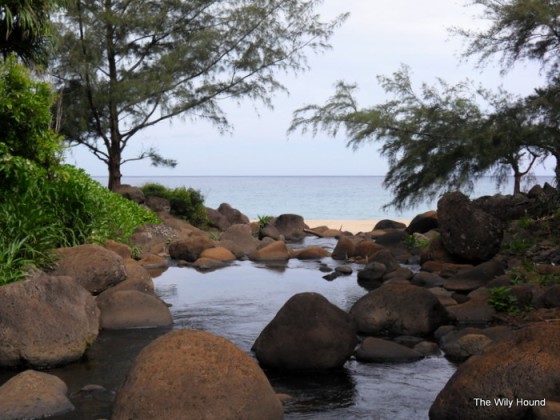 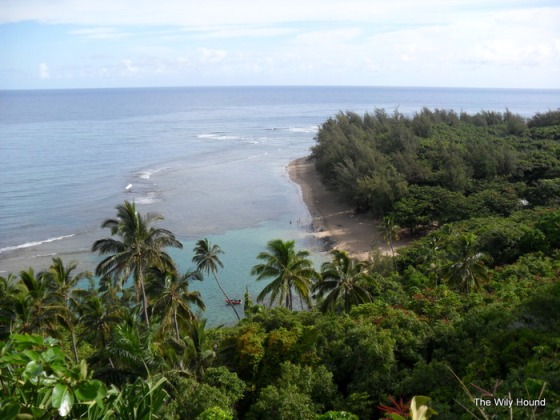 It offers incredible views of the Napali coast and the waterfall was amazing (and cold!). I would recommend the hike to anyone as long as they feel confident in their hiking abilities. We were seriously pooped by the end of it!

Another day, we rented kayaks and bopped along the Hanalei river. 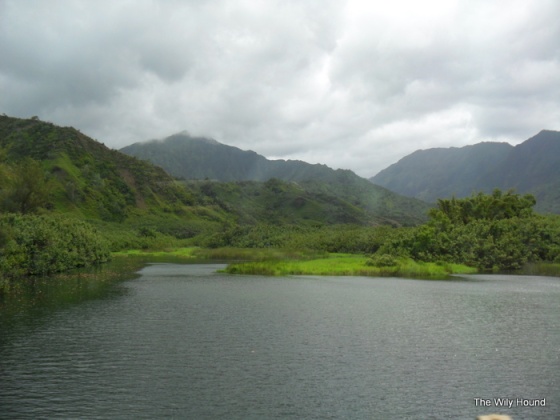 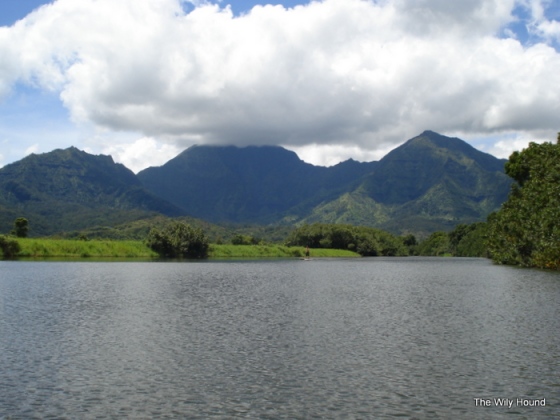 If you’ve ever been on the Jungle Cruise ride at Disney World, then you have a good idea of what the kayak trip was like. 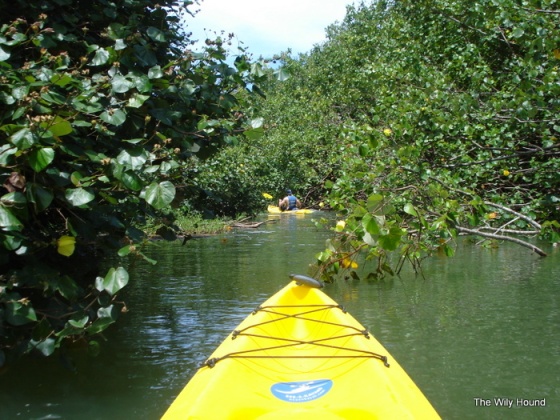 The scenery was so green that it didn’t even look real. And the fact that Justin tipped his kayak over and fell into the drink just made the trip that much more enjoyable for me. 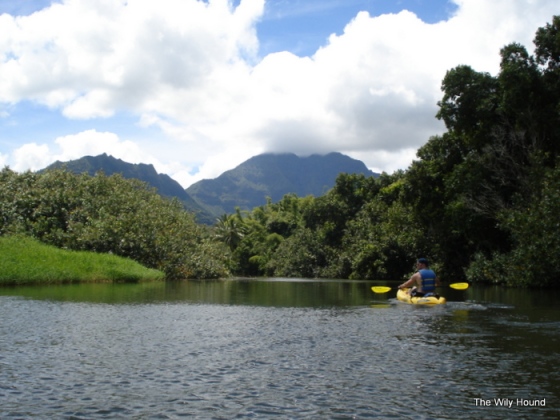 Other highlights of the trip included an ATV waterfall tour in Kipu, which is on the south side of the island. 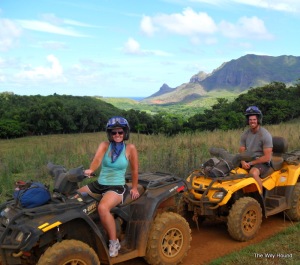 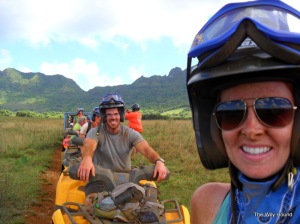 We had a blast and we were still trying to get red clay out of our teeth a few days later. You get seriously dirty on that ride. 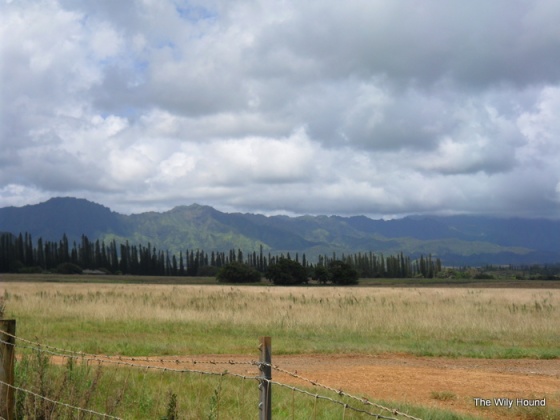 We were pretty surprised at how fast they let you go on the ATVs; I was a little nervous at first but it’s so fun once you get the hang of it. Plus, we went by a few areas where they had filmed scenes for Jurassic Park and Indiana Jones, so I didn’t really have an excuse to be nervous about a silly ATV when those poor actors had to run from dinosaurs.

Another highlight of the trip came courtesy of Justin’s mom’s cousin and her husband: they booked us a sailboat tour of the Na Pali Coast as a wedding gift. 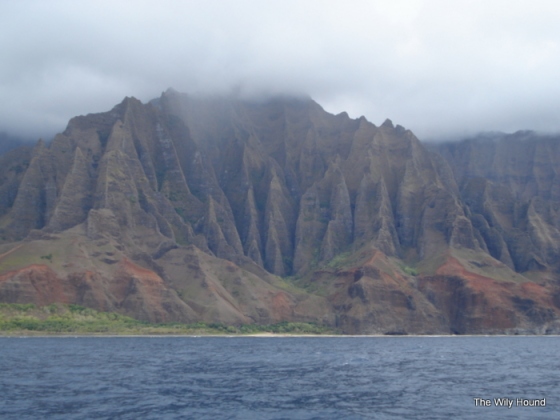 They had been to Kauai before and knew how beautiful the coast is, so they knew that a sailboat would be the perfect way to see it. 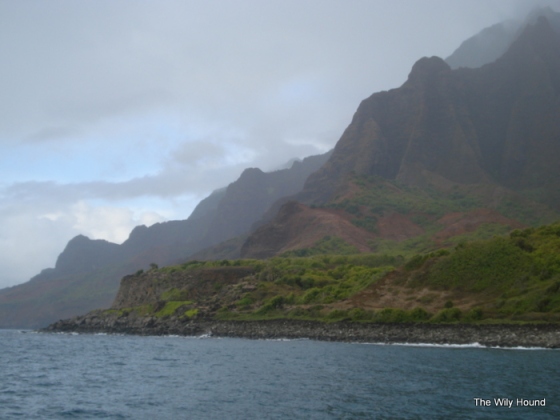 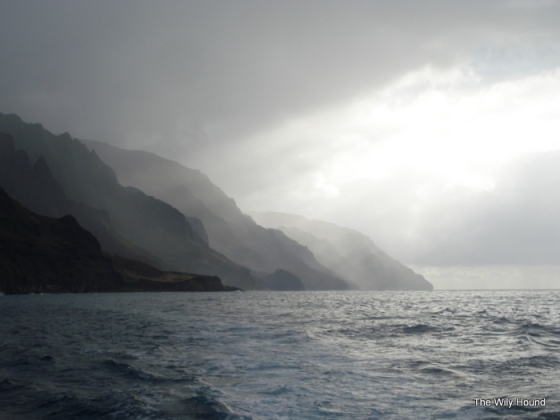 The boat ride was amazing and the Napali Coast is just indescribable. And they somehow arranged for a rainbow to make an appearance at the end of the tour! 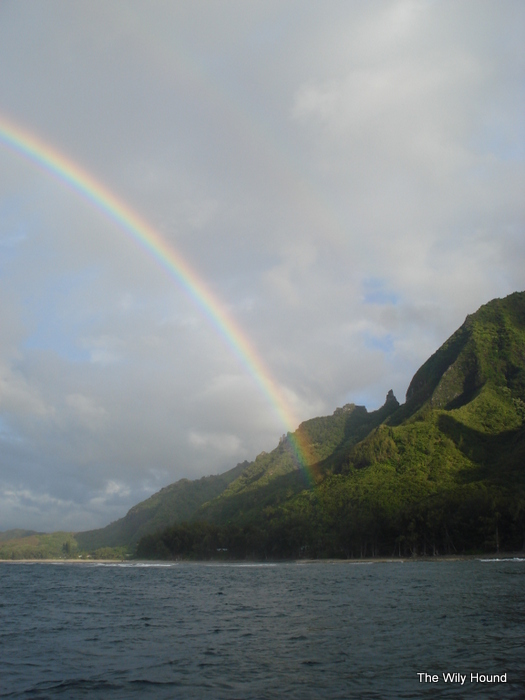 We’re still trying to figure out how they pulled that one off. They also wrote out a list of restaurants, shops, shave ice huts (a Hawaiian dessert that will knock your flip flops off – kind of like a snow cone but so much better) and supermarkets with tips for how to navigate the outrageous Kauai prices. It proved to be so helpful and we loved every one of their suggestions (total nerd confession: I keep the list in the purse that I brought to Hawaii because it makes me happy when I see it. Don’t tell Justin, he’ll make fun of me).

This leads me to another topic: the food. It was delicious. We had some definite favorites, and they are as follows: 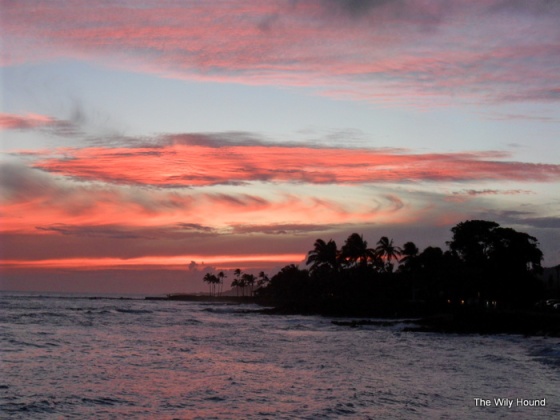 Sunset outside of the Beach House Restaurant 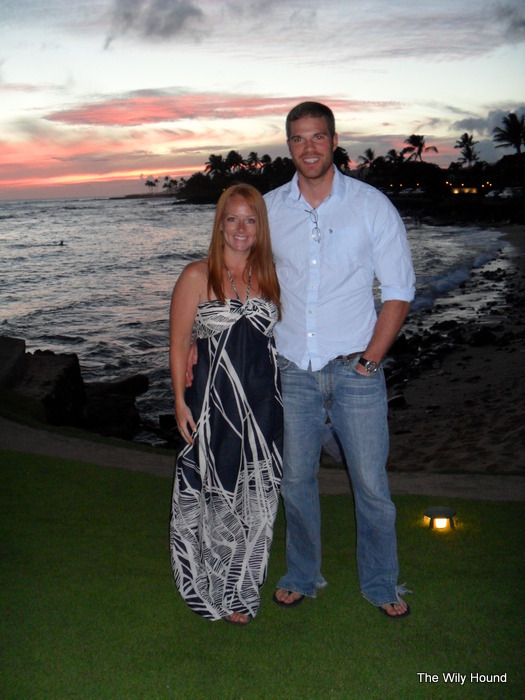 A couple of clowns outside of the Beach House Restaurant

All in all, it was an incredible trip. I would do the whole thing again in a heartbeat and I wouldn’t change a thing.

Except that maybe I would have a video camera ready for when Justin flips his kayak.