It was my mother’s birthday yesterday (happy birthday, mom!) so we had some of the family over on Sunday to celebrate. Justin had big plans for a dinner menu and started getting everything ready on Saturday; he planned to smoke a chicken and a few racks of ribs and he had a new appetizer that he wanted to try out. He was a man on a mission.

Although Justin has smoked ribs and brisket a number of times before, he doesn’t have a ton of experience smoking poultry. The the only other time that he had smoked a bird was last Christmas during a Turkey-Off with my brother PJ, and that ended in the near loss of his eyebrows and a trip to the ER.

Though I had every confidence that Justin would emerge victorious this time, I would be lying if I said that I didn’t have my keys in hand while he was lighting the coals, just in case. I didn’t have to worry, though – the smoking process went flawlessly and everything came out great. He prepared a brine on Saturday and soaked the chicken overnight in a big spaghetti pot. A brine can be done very simply by mixing up some salt and some water and essentially marinating your poultry before cooking it. You can also get a little fancier by adding in different flavors like fruits, herbs, vegetables, honey, booze…whatever! Since I’m a little hazy on the specific details of osmosis, I’ll let this smoker cooking website drop a little knowledge on all of you:

When chicken or other meat is put into a brine solution, a two-way transfer begins. Juices from the protein are pulled out into the brine, while the brine (along with any added sugar and flavorings) is pulled in. The end goal is to equalize the level of salt between brine and flesh. The salt changes the character of the proteins in the meat, breaking them down and loosening their grip on each other…and makes it harder for moisture to escape when the chicken is cooked. Sugars that are absorbed into the flesh hold on to water, which helps keep the meat even more moist when cooked.

Now that we’ve all learned a thing or two about brining, let’s get back to the party.

Justin tossed a little bit of everything into his brine, starting with some sliced citrus and ending with some cayenne pepper for a kick. The chicken was in the brine overnight and was in the smoker for the better part of the afternoon and it was falling off of the bone once it was done. It had incredible flavor and is definitely something that we will be making again! He made a rub for the ribs (he couldn’t remember the exact measurements, I’ll be sure to write it down next time he makes them) and those came out great, too.

He also tried out an appetizer recipe that he heard about from a co-worker and they were a hit and pretty easy to make. You’re welcome in advance for these:

All you need is a few peppers (I think they are commonly made with jalapenos, but since there are some folks in our family – myself included – who are total wimps when it comes to hot peppers, Justin got a milder version. I don’t know the name, but they were smaller than a bell pepper and bigger than a jalapeno but had a similar shape), some cream cheese, some sausage (pork or chicken both work), and some bacon (turkey bacon also works!). 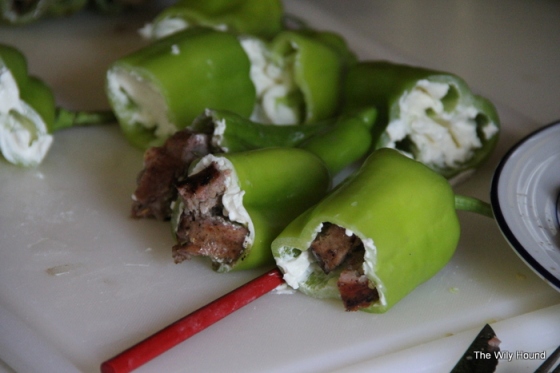 Chop off the bottom part of the pepper and scrape out the seeds. Cook the sausage on the grill or in a skillet with some olive oil. Once the sausage is done cooking, give it a rough chop and mix it with some of the cream cheese. Stuff the mixture into the peppers and then wrap a slice or two of bacon around the pepper, covering the chopped end to prevent everything from falling out, and secure with a toothpick. Toss them on the grill or in a 425 degree oven for 15-20 minutes or until the bacon is cooked to your liking, flipping halfway through to cook both sides evenly.

I bet they would be delicious with a jalapeno if hot peppers are your jam. Either way, we’ll be making these again too.

We finished off dinner with some cake and cookies, which were my contributions to the evening. As much as it sounds like I was sitting on my keister all day while Justin toiled over a hot smoker, I did manage to help out a little bit. I’ll be back tomorrow with a cookie recipe that is perfect for a holiday party (or your run-of-the-mill Tuesday)!