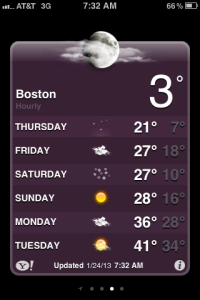 The public transportation in my area hit a bit of a snag yesterday and the whole city was thrown into a frenzy because people had to wait outside in the frigid temperatures. If you’re holed up in your warm house, snickering at the thought of some chilly weather throwing a city into a frenzy, cut it out. I would be snickering, too, except that I was one of the dummies getting whipped into a frenzy. Get your violins ready, this is a heartbreaking tale: I had to stand outside for half an hour and wait for a bus. And then when the bus finally came, it filled up 3 people ahead of me, so I had to wait another 15 minutes before another bus showed up.

I’ll give you a minute to compose yourselves.

Now I have a self-imposed rule against crying in public, and 99.9% of the time I stand by it. But yesterday morning as I stood hunched against the dirty wall of the train station, I came very close to breaking that rule. It was just so COLD and I was late for work and also, I’m a giant dumb baby. Luckily I was able to pull myself together and realize that if I cried right there on the sidewalk, the tears would immediately freeze to my dumb baby face and that’s never a good look. The bus eventually showed up and I eventually thawed out, but I’m pretty sure I have a small spot of frostbite on my cheek. I mean, I’m no doctor, but I looked on WebMD and one of the symptoms is white patches of skin, and I’ve got that. I floated the idea to Justin, who pointed out that I’m not my tannest during the winter to begin with, so pale skin might not be the best deciding factor. A fair point, but I’m still not convinced.

Anyways, after a long, cold day, Justin and I decided that some comfort food was in order. Lately, our favorite go-to comfort meal has been grilled cheese sandwiches and roasted Brussels sprouts, so that’s exactly what we had. 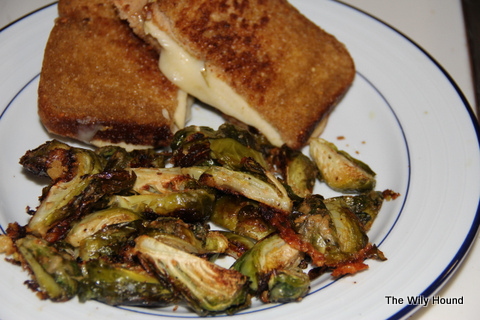 They’re flavorful and have a great texture and are a healthier alternative to chips or fries. Personally, I like them a little on the well-done side, so I leave them in the oven until they almost look burned; the inside is still tender but the Parmesan cheese and garlic work together to make the outer layers nice and crispy.

Preheat your oven to 400 degrees and line a baking sheet with tinfoil. In a large bowl, toss the Brussels sprouts with the olive oil, garlic, salt, and pepper until they are fully coated (add more olive oil as needed). Spread the Brussels sprouts out in a single layer on the baking sheet and sprinkle with the Parmesan cheese. Roast for 35-45 minutes, tossing them halfway through to ensure even browning. Sprinkle with salt, pepper, and more Parmesan cheese to taste.