This will come as no surprise to anyone who has waited for me to show up to anything, but punctuality is not my strong suit. I’m working on it. That being said, this post recapping my 4th month of pregnancy is l-a-t-e. I’m actually creeping into month 6 (!) this week, so I invite you to use your imagination and pretend that we are still cruising through May.

I should also point out that a) baby brain got the best of me during weeks 15 and 17, so there aren’t any pictures documenting them, and b) Brody was offended that he didn’t get any face time during the last recap post, so he wormed his way into the shots this month. Clown. 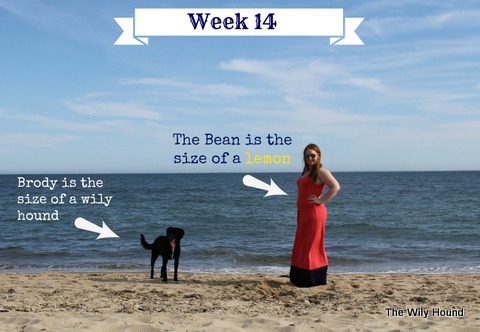 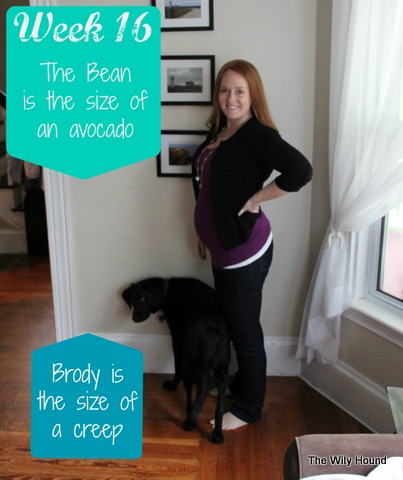 Highlights
-May was a big month around here – we celebrated a few birthdays (my dad’s and mine), Mother’s Day, and Memorial Day. Lots of fun family time, lost of delicious BBQ, and a great, relaxing BDay trip to the beach during week 14.
-Although I could tell a difference earlier on, I think I really “popped” during week 16 and crossed over from the land of “Wow, way to pack on that winter weight” to “Oh, you’re pregnant!” It’s a good feeling.
-I wore my first pair of maternity pants during week 15. They’re glorious and I recommend them to anyone, male or female, pregnant or not.
-We had our anatomy scan at the end of week 17 and we found out that we are having a BOY!!! We were both so thrilled with the news and we’re still getting used to saying “him” instead of “the baby,” “the bean,” or (I hate to admit) “it.” Everything looked great at the scan and the ultrasound tech said that he was the smartest, nicest, most graceful baby that she had ever seen. (Full disclosure: I might have made that last part up. But I could tell that she was thinking it.)

Symptoms
Honestly, nothing big in this category. I mentioned in my last recap post that I had been really lucky as far as symptoms go and hadn’t been experiencing the normal nausea, morning sickness, or horrible fatigue that you hear about. That has carried over into the 2nd trimester and I’m still feeling great! I’m still rocking a superhuman sense of smell and I’ll experience some breathlessness if I’m trucking up a big hill or eating cereal too vigorously. I’m back to sleeping through the night and I haven’t had any heartburn since the early weeks of the first trimester.

Cravings
-Cereal is still a favorite. Specifically, Cinnamon Toast Crunch and Apple Jacks. You know, the healthy stuff.
-Corn on the cob. We grilled steaks for my birthday and I was thrilled to see that a supermarket down the Cape was selling corn on the cob; I had 2 ears and I’ve wanted it every day since then.
–These fruit popsicles. Raspberry, specifically. I can’t get enough of ’em.
-Still really loving citrus and soft serve ice cream

Aversions
-I wouldn’t call this an aversion, per se, but sushi. I used to want to eat it every day, but it doesn’t even sound a little bit appealing any more. We picked up some (non-fish, don’t worry) sushi a few weeks back and it tasted like cardboard. I hope this is just a temporary thing because that was one of my favorites!
-Garlic (in some forms) and red onions still make me run for the hills.
-Cooked zucchini. Not sure if it’s the texture or the taste, but either way I’ll pass.

Miss anything from your former, non-pregnant life?
-I officially retired sleeping on my stomach, which was always my go-to. Not a terrible transition but I do miss it.
-Giant, delicious iced coffees
-Running. Rather, having the option to run. I wasn’t running a ton earlier this year, so I was hesitant to pick it up again once I found out that I was pregnant since I didn’t have a solid running base. I went out a few times in the beginning and it went fine but I didn’t want to push things. Memorial Day weekend marked the 1-year anniversary of running my first half marathon and it made it itchy to get out there again, but I mollified myself by vowing to sign up for a race once the Bean has made his arrival.

4th month takeaways
I’m so happy to be into the 2nd trimester and to have had a great ultrasound and anatomy scan. I’m still thankful for how lucky I’ve been so far and I’m grateful that I’m able to enjoy pregnancy and not be bogged down with symptoms. The cat is officially out of the bag and everyone at work knows the good news, so it’s a relief to not have to watch what I’m saying and worry about accidentally spilling the beans about the Bean. Good stuff all-in-all!

And as for Brody, we’re still waiting for those instincts to kick in and for him to realize that something is going on. No dice so far. We’ll keep you posted.