3 things that surprised me when I sat down to write this recap:

-That I’m actually in my 6th month of pregnancy right now. I’m sure I’ll be whistling a different tune in a few weeks, but it has really flown by so far.
-That I’m caught up with the monthly recaps. I’m in my 23rd week right now, so we’re back on track with updates.
-That there are actually pictures from each week of my 5th month, and that Brody only weaseled his way into 1 of them. 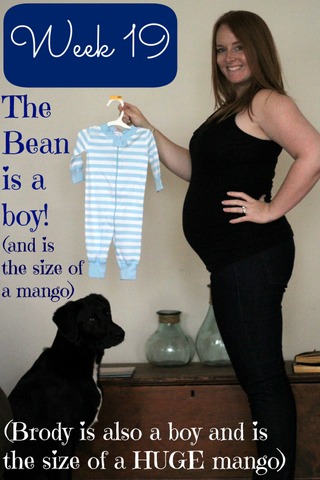 Highlights
-This isn’t a new highlight, per se, but it’s new to the blog so just go with it. My sister Heather is also pregnant! She is due in early December and we couldn’t be more excited. We’ve already given my parents heartburn by asking them what they would do if I had the Bean 2 weeks late and Heather had her baby 2 weeks early since we’re delivering at different hospitals. How would they choose which daughter to tend to?! Would it be based on who they like better? (For the record, they refused to give a real answer, choosing instead to go with option C: leave for a short vacation until the dust has settled.)
-This isn’t a new highlight from this month either, but we’re still so excited that we’re having a boy. I’m surprised that I haven’t been asked to leave baby clothing stores for exceeding the time limit on staring at tiny argyle sweaters and boat shoes. And if you’re wondering if I have purchased a whale sweater already, the answer is yes:

-We had another doctor’s appointment and got to listen to the Bean’s heartbeat, which sounded great and strong and as cute as a button. While we were there, the doctor predicted that I would be able to feel the Bean move soon since I wasn’t sure that what I had been feeling was, in fact, the Bean and not just all of those Pop Rocks that I had been huffing down. Sure enough, a few days later (at 21 weeks and 3 days along) I felt an unmistakable kick and it’s been pretty consistent since then. I’ll be honest, it was a little unnerving at first since it’s such a foreign sensation, but I’m getting more used to it and it’s awesome.

Symptoms
-Sore gums that lasted about a week around week 19. I didn’t change my routine or anything, so I can’t explain the mysterious appearance and disappearance – odd.
-We had a few really hot days and I noticed that my feet and ankles swelled up pretty good. One instance left me struggling to cram my feet back into my shoes after walking around in the heat, and the other time Justin was genuinely concerned and was rapid-fire asking me questions about any other symptoms to see if I needed medical attention (let the record show that I think he was being dramatic, but I’ll agree with him that they were pretty swollen). Both times were remedied with a bunch of water and some time with my feet propped up.
-Related: I had a pretty uncomfortable battle between heartburn and swollen feet, which is tricky because one needs to sit up to relieve heartburn and one needs to lie down to relieve swollen feet. You’re a fickle beast, pregnancy.
-Weird dreams. I had a dream that I had already given birth (to 2 babies!) but then forgot about it. Justin and my friend Laurel had to keep reminding me that I had the babies weeks ago. I’m going to try to not read too much into that one.

Cravings
-Watermelon. Big time. I can go through an entire watermelon in a weekend without batting an eye.
-Still loving fruit popsicles. Justin discovered my stash and now he’s hooked, too, so we try to stay pretty well stocked.
-Had a serious clam chowder craving for about a week, so Justin made a homemade batch and it was delicious.
-Still loving the old standby’s: cereal with really cold milk, and soft serve ice cream

Aversions
-Nothing really new this month. I’m still on shaky ground with garlic, and red onions are still dead to me.

Missing anything from your former, non-pregnant life?
-I still miss sleeping on my stomach, and now sleeping on my back is getting a little uncomfortable. Side-sleeping it is!
-Giant, bucket-sized iced coffees.
-Not getting out of breath from walking up a flight of stairs or a hill. Or a curb. (Just kidding.) (Not really.)

5th month takeaways
I said it before, but it’s hard to believe that I’m through month 5 of this ride. Time is really flying by and I’m trying to remember to take it all in now instead of just concentrating on what’s ahead. I’m also pumped that I get to go through this at the same time as my sister; it’s great to be able to bounce ideas and stories and symptoms off of her and to have someone who is in the exact same mindset at the same time, if that makes any sense.

Still no changes from Brody. I’ve been leaving So You’re Going To Be A Big Brother! pamphlets around the house to try to kickstart some sort of a reaction, but nothing so far. We’ll keep you posted.

Want to check out my other pregnancy posts? Click here for a 4 month recap and here for a 1st trimester recap.