Well, here we are – the end of my pregnancy.

What’s that you say? “The end of my pregnancy” was three months ago when I had Will? And that it doesn’t make any sense to post a recap after the actual birth announcement?

I’ll give it to you, you make some fair points.

But the fact that I had started the recap posts as a way to document my pregnancy and remember it when my long-term memory finally takes a page from my short-term memory’s playbook and disappears left me itching to get this last recap post written. Had this been a few months ago, I could say that I’m writing it because I don’t like to leave a project unfinished, but the pile of half-folded laundry on my dining room table indicates that I’ve since become a-okay with bailing halfway through a task.

Also, a few things to note before we get into it:

-I mentioned in my last recap post that I counted the weeks wrong because figuring out how pregnant you are is hard, so we’re working with a few extra weeks here
-A few pictures are missing this month because, if my memory serves, I was busy eating candy corn and caught in the throes of labor for weeks 36 and 39, respectively. 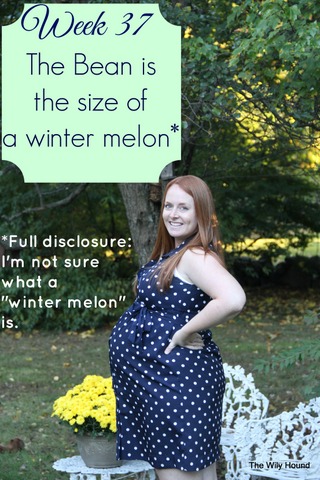 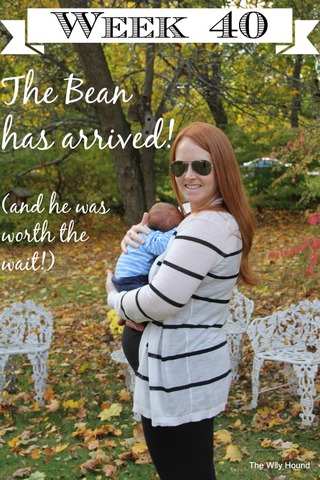 Highlights
-Washing and organizing all of the tiny baby clothes and diapers. I’m not  sure that there is anything cuter than a tiny baby sock. Well, except for a tiny baby, I suppose…
-My sister Heather’s baby shower! It was a great day and I love the “pregnant sister” photo shoot that took place after the bash. I’ve said it before and I’ll say it again: it was so fun going through pregnancy at the same time as my sister. It’s wonderful to have someone to celebrate (or commiserate) with who knows exactly what you’re going through, and it certainly doesn’t hurt if that person can make you laugh so hard that strangers move away from you on the train.
-More doctor’s appointments. I started going every other week and then every week, which meant that I was able to hear the Bean’s heartbeat pretty frequently. Even though I was most definitely feeling him move around, there’s still something reassuring about hearing a strong, solid heartbeat followed by an “everything sounds great!” from the doctor.
-A final ultrasound. I was still measuring big at week 38, so my doctor ordered an ultrasound for week 39. It was really fun seeing the Bean and knowing that we were so close to meeting him in person! As it turns out, we were SUPER close to meeting him in person, because I went into labor less than 24 hours after that ultrasound. I’ll be honest – none of us saw that coming (including the doctor!).
-Not having a baby at work or on the train. It was a real concern and I sent the Bean a telepathic “thank you!” for waiting until I made it home from my last day of work before he started getting ready to make his appearance.
-This probably goes without saying, but the biggest highlight of month 9 was getting to meet the Bean. He showed up at 39 weeks on the nose and I’ve been having trouble putting into words how it felt to see him and hold him for the first time. So I’ll just make up a word that, in my opinion, comes closer to describing it than any preexisting words that I’ve come across: Surfanmagisomeible.

Symptoms
-Swollen feet. Oh, the swollen feet. My footwear options at the end of my pregnancy were slippers or flip flops, which are just about equal on the “appropriate in an office setting” scale. I got really ambitious during week 38 and tried to wear boots; by some miraculous glitch in the law of physics, I was able to cram the left one on, but trying to get the right one on left me so frustrated that I almost kicked the boot through the wall. It got ugly. And fun fact: even though you think that your feet couldn’t possibly get any bigger, they actually get worse for a few days after you deliver.
-Breathlessness, sore hips, general hugeness. I had a very comfortable pregnancy and was spared a lot of the unpleasant symptoms that a lot of women deal with (like morning sickness, back pain, heartburn…the list goes on), so I know that I’m lucky. I wasn’t terribly uncomfortable at the end of my pregnancy, I was mostly just…awkward. I was just so big and clumsy (I couldn’t stop dropping things – luckily that trait subsided by the time the Bean showed up) and it was such a chore getting out of chairs or bed or cars. I had to run for a train 4 days before I delivered, which was so brutal, but seeing the looks on peoples’ faces as I trudged past made it kind of worth it.

Cravings
Oh, pretty much everything. Standouts include Dark Chocolate Covered  Marshmallows from Trader Joe’s, pineapple, and Oreo ice cream. Justin, bless his heart, went food shopping the day before I delivered and not only bought all of the marshmallows at Trader Joe’s, but also stocked up on deli meat, Guinness, and all of the other weird stuff that I had been talking about for the past few weeks so that I could enjoy it all when I got back from the hospital. And enjoy it I did.
My loving parents proved once and for all that they read this blog by not only having candy corn on hand when I came to visit, but by also bringing more candy corn and an Italian sub for me in the hospital. It was the most glorious thing I’ve ever eaten. Vying for 2nd most glorious thing I have ever eaten were the Reese’s peanut butter cups that they brought in, the pumpkin bread that my sister Heather made and brought in, and the cupcakes that my brother PJ and his girlfriend Sophie brought in. Man, they sure know the way to a new mom’s heart, huh?

Missing anything from your former, non-pregnant life?
Moving and sleeping easily and comfortably, and breathing like a lady instead of a horse that just won the derby. Seriously, I had to take breaks to catch my breath after getting off of the couch. Not cute.

9th month/pregnancy takeaways
Holy moly. It’s not easy summarizing this whole shebang in a few sentences, that’s for sure, but I’ll try: I loved being pregnant. I thanked my lucky stars every day that I had such a great experience, though I’m glad I kept up with the pregnancy recaps because I’m pretty sure I would have forgotten about all of the uncomfortable parts of pregnancy and just remembered it as a glorious time during which my ankles were slim and I still (still?) moved with the grace of a gazelle, even at 38 weeks. I find myself missing being pregnant; everything was so new and exciting and there was always this huge event looming (in a good way!) ahead that you had to look forward to. (Granted, life with Will is new and exciting in a whole new way, but I won’t get into that here since this is a straight-up pregnancy recap.)
So I guess to summarize: it was a fun, wild, exciting, nerve wracking ride and I loved it. And I will always have a special place in my heart for candy corn and watermelon.

Just for fun, the first and last of the bump pictures: 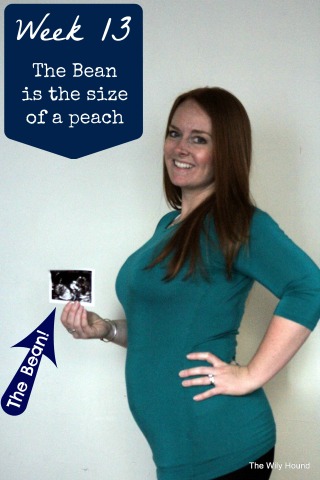 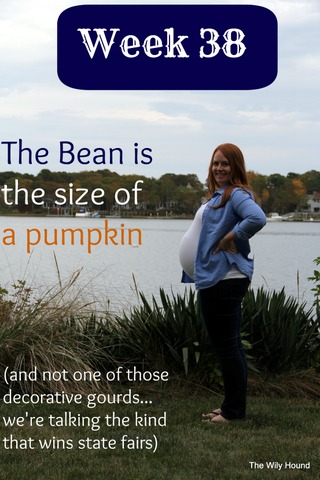